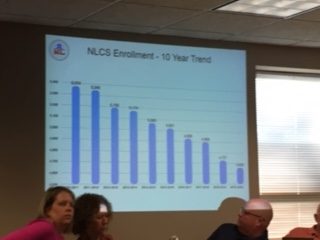 The Committee will consist of 30-32 different stakeholders in the community. Those individuals will be chosen to lead a visionary committee of approximately 30-32 people from diverse backgrounds including members of the business community, educators, parents, and other stakeholders. This group would make recommendations to the school board.

In order to be open and transparent, Mungle presented to the public the situation that the school system has been in for the past ten years.

Student transfers out of the corporation have affected the corporation as the state has allowed parent choice to take place. Locally, parents have transferred their children using Choice Scholarship with 70 students, Charter Schools with 123 students, Parent Choice with 147 students and other options with 6 students.

The costs of operating a school have also increased. This includes securing the doors, resource officers, and health care. Health care costs have risen over 63 percent. The school corporation changed from Anthem Blue Cross/Blue Shield to IU Health which has added expenses to some according to some North Lawrence Community Schools employees. Dr. Mungle states they will continue to look at some of these issues and figure out how to control these expenditures.

The other area where the corporation is looking at to improve is how to address the grades from the Indiana Department Of Education and then trying to improve the success rate at each school. “That may be taking a bus trip and see some of the things that make other schools successful in a school corporation our size,” Mungle stated.

Bedford North Lawrence High School received a A grade in 2014-2015 and a B grade in the years following.

The starting salary for a North Lawrence Community Schools teacher is $35,250 and top scale stands at $61,960.

All school board members encourage individuals to contact them by email, phone and other forms of communication. Dr. Mungle would like to have the committee up and running by August with a recommendation for the school board by January 2020. No decisions will be made in the 2019-2020 school year.