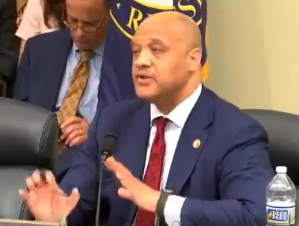 (WASHINGTON, D.C.) – Pres. Trump is hiding white supremacist-inspired domestic terrorism, said Rep. Andre’ Carson, in a speech on the U.S. House floor this week. Carson said he wants Congress to pass a bill that would provide for an annual report on domestic terrorism.

“At a time when this president is ignoring the truth about domestic terrorism and his administration is concealing and hiding the proliferation of white supremacist-inspired incidents,” said Carson, “Congress and the public urgently need more information to better understand and prevent domestic terrorism.”

Carson offered the bill as part of the Intelligence Authorization Act.

“It is important that we acknowledge domestic terrorism as a very serious threat and we must do more than just talk about it as a societal problem.”

Carson said the annual report would help the FBI and other intelligence-gathering agencies keep track of domestic terrorism, so Congress could pass laws that help prevent it.

“Much of the report… would be made available to the public, increasing transparency, while the full report would be provided to oversight committees in greater detail,” said Carson.

He also encouraged Congress to pass an amendment that he authored that would address foreign interference in the supply chains of American businesses. The amendment would require the National Counterintelligence and Security Center to come up with a plan to enhance our defenses against the exploitation of the supply chain.