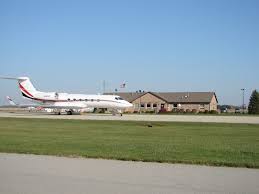 The Federal Aviation Administration this week announced a total of $477 million in infrastructure grants nationwide, including more than $4.9 million for Indiana.