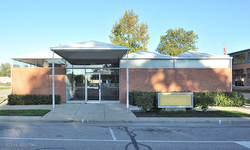 (BEDFORD) – A local company has developed a software program to help Indiana Rural Communities have access to pharmacists and prescriptions.

The Indiana legislature passed legislation that would allow a remote pharmacy to open in the small community with less than 10,000 residents as long as there is no pharmacy within a 10-mile radius back in 2017. Hoosier PC of Bedford has developed a software program to bring remote pharmacies to Indiana.

One of those remote pharmacies just opened in Hope, Indiana in March 2019. Lucky’s Market and Hoosier PC worked together in bringing health care to rural Indiana Communities.

“A larger corporate pharmacy may not open up a pharmacy in a small community with less than 10,000 – 15,000 residents because it is not profitable for them to do so,” said Matt Abel Senior Developer Engineer at Hoosier PC.

“We have developed the program, to where the overhead costs are not prohibitive and it is designed to meet the needs of the pharmacist to feel comfortable in prescribing the medications and meet the requirements of state law,” Abel continued.

Lester Burris is a pharmacist for Lucky’s Market. He says, “We sat down with Hoosier PC and told them what we required and they were able to write out the program to keep our costs manageable. At the time there was only one other company in this market, and it was a huge price tag. So we questioned whether we could get into this market yet. Now, with Hoosier PC writing the program, it was manageable and we opened the remote pharmacy in Hope,” Burris added. “We wanted to increase access but be able to keep the costs of opening a pharmacy low.”

The law allowed for a pharmacy to open without having a pharmacist at the location.

“We had an elderly customer who was not able to get to Columbus because of transportation,” Burris added. “She held off on getting her blood pressure medication filled for a couple of months because she had no way of getting to the pharmacist. Now she has access closer to home in getting her prescriptions filled.”

The company developed two different programs for the “Port-A-Script.” The first is a Cloud Version of Pharmacy and the other is a Premises Version.

The Cloud Version is used for a Pharmacy who does not have the capital to invest in a lot of equipment and the information is stored in a cloud system and retrieved by the pharmacy through the cloud.

The second system is a Premises System where they are able to have the equipment on site, and they have the ability to keep the information on site and transmit the information to the supervising pharmacy.

In Indiana, they are more than 78 communities that may lose pharmacies. Presently, the only other remote pharmacy is in Albion, Indiana. Now they are ways to bring health care to rural Indiana communities at a fraction of the cost.