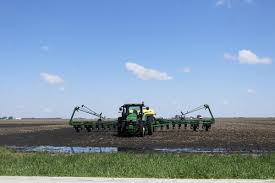 (INDIANAPOLIS) — Indiana farmers are getting closer to completing the crop planting that’s been badly delayed by this spring’s frequent rains.

The newest U.S. Department of Agriculture report shows 84% percent of Indiana’s expected corn crop was planted at the start of this week. That’s up from just 31% from two weeks ago but the state’s five-year average would have all the corn crop planted.

Farmers in neighboring states are also struggling. Illinois has 88% of its corn crop planted, while Ohio is only has 68% completed.

Agriculture officials say the wet spring has forced some farmers to consider switching corn acreage to other crops.

The latest report lists 64% of Indiana’s soybean crop as planted, up from 17% two weeks ago. The state’s five-year average is 94% for soybean planting.