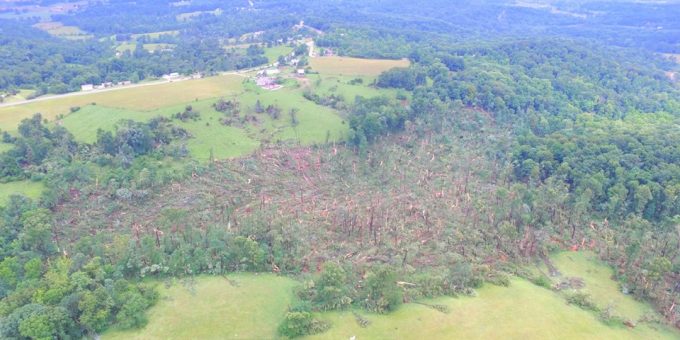 (BLOOMFIELD) – A Tornado/Flooding Disaster Declaration was signed Tuesday afternoon by Edward Michael, Vice-President of the Greene County Board of Commissioners.

He signed the declaration after a tornado hit Greene County the night of Saturday, June 15, 2019. The tornado caused considerable damage to many who can ill afford it.

Winds of 130 mph caused damage to homes and brought down trees, and flooded roads made travel around the area difficult.

Center Jackson Fire Territory posted on Facebook that approximately 76 welfare checks were made to residences damaged in the path of the tornado.

United responded to incoming calls including a gas leak, a car fire, and power lines down.

The post went on to say that REMC is trying to restore power in a majority of the area by Monday as of 10:40 p.m. All but 23 households had power restored by this time. Crews hope to have the rest restored by Wednesday morning.

In signing the declaration Michael said, “The tornado that hit Greene County Saturday night has caused considerable damage and damage to many that can ill afford it. Many do not have insurance and have suffered a great financial loss. We are doing this in the hope of getting Federal Disaster Funds to help pay for these damages and help these people to put their lives back together. Also, we are also declaring a flooding disaster due to the county roads that have been impacted and the agriculture damages our farmers have sustained. The first step toward getting Federal Funds is to have a declaration signed by the county executive. That is why we are taking this step. A declaration must proceed receiving Federal Funds. Damage assessment continues and as we receive that information, we are reporting it. These people are our responsibility and we are trying to help our citizens in any way we can.”