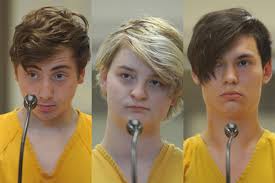 (ANCHORAGE, AK) — An Indiana man implicated in the murder of an Alaska teenager had allegedly promised millions of dollars to the teens who killed her in exchange for images of the killing, the Anchorage Daily News reported Saturday.

Brehmer was supposed to send photos and videos of the killing back to Schilmiller, according to the court documents.

Brehmer is charged with first-degree murder in the death of Cynthia “CeeCee” Hoffman. Hoffman was killed June 2, 2019 near a rural Anchorage trail. Police found her bound with duct tape in the Eklutna River near Thunderbird Falls. She had been shot in the back of the head.

On Tuesday, federal prosecutors announced the arrest of Schilmiller on child pornography charges. He is charged with production of visual depiction of minors in sexually explicit conduct and attempted receipt of those depictions.

Brehmer is represented by the Alaska public defender’s office. It has a policy of not commenting on pending cases.

Brehmer told police that she and Kayden McIntosh, 16, accompanied Hoffman to the popular trail and planned to take photos of each other tied up.

At some point, police said, McIntosh took a gun from Brehmer, shot Hoffman and pushed her into the river.

Brehmer and McIntosh then drove to a park, called Hoffman’s family and said they were dropping her off at the park, police said. They went to another park and burned Hoffman’s purse and other items and the gun used in the shooting, police said.

McIntosh is charged as an adult with first-degree murder and evidence tampering. Another adult and male and female juveniles are charged with conspiracy in the case.

The Daily News reported Saturday that the teens told police each of them was supposed to receive a share of Schilmiller’s promised reward for their role in the killing.

During a search of Brehmer’s phone, police reported finding sexually explicit photos and text messages to Schilmiller discussing them.

Brehmer told police she shot video of a girl who was 8 or 9 and another who is 15 and sent them to Schilmiller. In interviews, she referred to him as “Tyler” from Kansas.

Hais, who is part of the FBI’s Child Exploitation Task Force, said in the criminal complaint that investigators determined “Tyler” was Schilmiller. Text messages on Brehmer’s phone show Schilmiller directing Brehmer on how she should assault the older girl, authorities said.

Chloe Martin, spokeswoman for the federal prosecutor’s office in Anchorage, has said that Schilmiller will be extradited to Alaska.