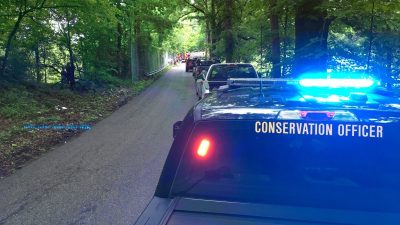 (BEDFORD) — An Ohio couple was rescued Saturday after driving their vehicle into a quarry on Harold Smith Road.

According to a Lawrence County Sheriff’s Department report, at 10:06 a.m. the couple drove over a steep embankment in the 300 block of Harold Smith Road and down into the quarry.

Deputies say that 67-year-old Stephen Marsh, of Ohio, was not familiar with the road. Police say he was traveling west on Harold Smith Road in a 2017 Chrysler Pacifica when the car hydroplaned and went off the west side of the road, traveled up the embankment and down the other side.

The car collided with some trees before traveling over the edge and down into the quarry. The vehicle overturned on the driver’s side partially immersed in water.

The couple was able to to get out of the car. Firefighters from Marshall and Pleasant Run Volunteer Fire Departments along with the Bedford Fire Department, Indiana Conservation officers and Cave Rescue used ropes to rescue Stephen and his wife, 68-year-old Elizabeth Marsh, from the ledge of the quarry.

Stephen suffered a cut to his left elbow. His wife suffered minor cuts and scrapes. Both were wearing their seatbelts at the time of the crash.

Both were transported by separate ambulances to IU Health Bloomington Hospital following the incident.