(NORTH VERNON) – Inmates in the Jennings County jail are spending their days in bright pink cells.

The cells were painted pink after they failed a recent jail inspection because the building needed to be painted. 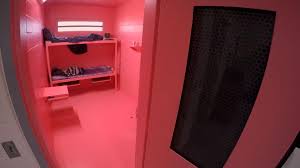 Photo WDRB
The jail commander picked a vibrant shade of Baker-Miller pink.
Research dating back to the 1970s shows this particular shade of pink is physically soothing. According to psychologists, it’s believed to help tranquilize feelings of anger and reduce hostile, violent or aggressive behavior. But beyond that, Sheriff Kenny Freeman hopes it deters inmates from returning.
So far, four holding cells have been painted, but the jail plans to do more, depending on how inmates react.
Sheriff Freeman says if the pink cells are successful, he hopes to share the technique with other jails in the area.
Information Kate Springer of WDRB, https://www.wdrb.com