(OOLITIC) – People are either going to clean up their property or will pay to keep it that way, says Oolitic Town Council President Bill Kendall. 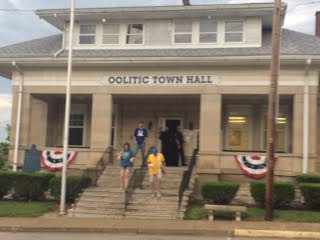 The first step, to enforce those ordinances, came a couple of weeks ago when the town council asked the Town Marshal Jon Jeffries to start enforcing the abandon vehicle ordinance.
“It’s time people start cleaning up their property. People are either going to clean it up, or they will pay to keep it that way,” Kendall reinforced at the meeting.
Mark Love, who resides on Indiana Avenue in Oolitic, addressed the Council with issues with a residence next to his.
He described how boards, shingles, trash all litter the property next to his. And the house is ready to collapse.
“I am joyful that they are finally addressing these issues. I try to work and keep my property looking nice. And others should do the same,” Love stated.
Resident Bill Tolbert was concerned about what he described as a “junkyard” at 109 Lafayette Avenue. Tolbert told the Council that for more than three years, that particular property had looked that way.
Marshall Jeffries told the council the vehicles on that property were tagged.
“We will start addressing the abandoned vehicles first, and then we will be moving to make sure lawns are kept mowed,” says Kendall
Jeffries told those attending property owners they have three days to respond if they are warned about an overgrown yard. Town crews will then mow the property and charge the property owners $75 per hour per employee. If they don’t pay, the bill will be added to the property owner’s taxes.
Town Council Member Glen Gross stated, “it is time we start enforcing this ordinance townwide. And start enforcing them all, and not in one particular part of town.”
In other business: