Content Warning: The following story contains graphic images which may upset sensitive viewers and children.
(BEDFORD) – Jennifer Fields of Springville addressed the Lawrence County Commissioners Tuesday morning with concerns of three vicious dogs in her neighborhood. The dogs have killed and injured beloved pets, including hers.

Now she has no option but to carry a 9mm handgun and stand guard while her two young daughters play in the yard as she fears the dogs will attack again.
Three South African Boerboels have terrorized the neighborhood on Harrodsburg Road.
Fields’ bloodhound Jolene suffered a neck injury. The wound required 20 stitches, two wound drains, antibiotics, and pain medications, but she survived. 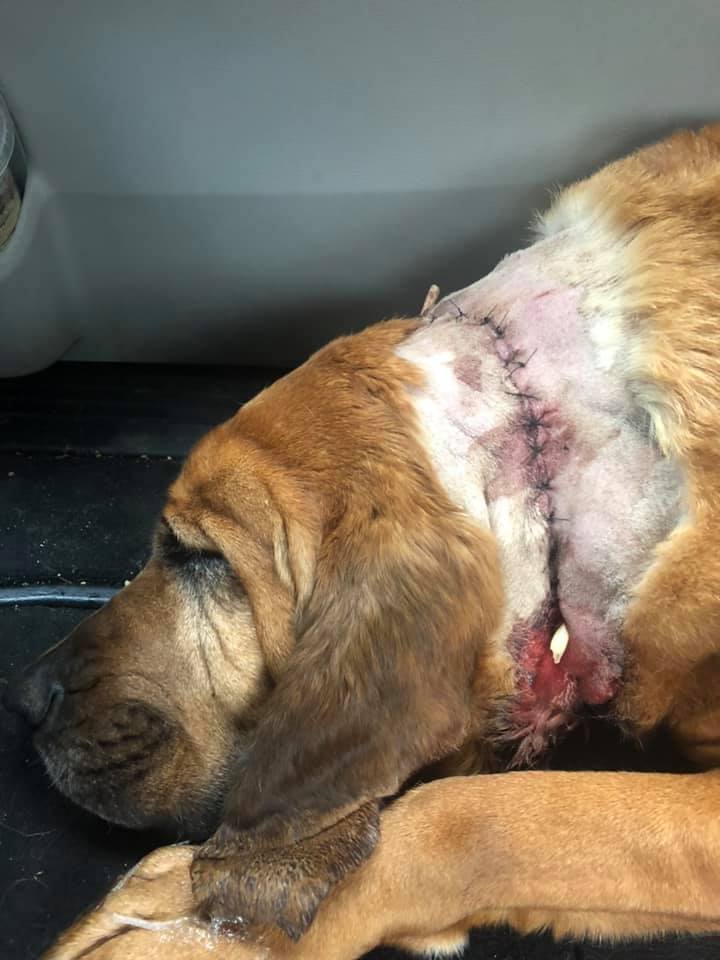 Jolene’s injury
Fields and a group of supporters plead with county officials for stronger laws.
She told the commissioners the current animal control ordinance does little to protect their pets or them from aggressive dogs.
Dr. Stanley Stancil, the owner of the African Boerboels, was cited for three counts of animals running at-large, given an infraction for having an animal stray beyond his premises and another for harboring a non-immunized dog, each a $135 fine. In March he was charged with criminal mischief, and the dogs were impounded at the White River Humane Society. The charge was dismissed on May 23. Once the criminal mischief case was dismissed, the dogs were all given back to him. The humane society was not paid for housing the dogs.
Fields told the commissioners that she and her husband now carry weapons when they and their children are in the yard.
“I even bought a tank top with a holster made into it so I can have my gun close while I garden,” she added. “I am constantly on high alert. I am scanning the wood line, listening for the sounds of something walking through the woods, listening for growls or barks. Worrying. Most of all, worrying, worrying about what I will do if this pack of large dogs comes after one of my children. How could I ever shoot them quickly enough to save my child? How does a parent shoot a gun into the direction their child is in, anyhow? Every day is a calculated risk.”
The dog’s first victim was in December. Jessie was an elderly beagle mix owned by Sam and Dana Martin. The Boerboels ripped the dog to shreds.
In February, Lane and Lesley Kimmel’s dog, Dozer, was attacked. Two of Stancil’s dogs held the beagle-basset mix while the third ripped its stomach open. Dozer died from his injury.
Lawrence County Animal Control Officer Lola Nicholson issued Stancil the first three citations.
38 days later, Fields said, her 10-year-old bloodhound Jolene barely escaped death. Her vet bills came to more than $1,500.
She is worried the dogs next victim will be her child or a child in the neighborhood.
Also attending the meeting was April Deon. Her dog Dak was killed by her neighbor’s two pit bulls while on its leash, 20 feet from her backdoor. The dogs’ owner was cited for having an animal running at-large and harboring non-immunized animals May 20, but the pit bull will be released from quarantine Thursday. 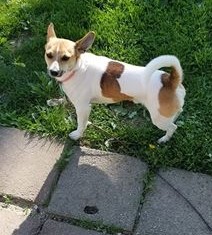 Dak
The owners don’t blame the Sheriff’s Department or Officer Nicholson.
“She does a great job, but her hands are tied,” says Fields.
Sheriff Mike Branham addressed the group and commissioners saying he, Nicholson and Attorney David Smith have been working diligently to update the county’s mid-1990 ordinance.
Sheriff Branham says the animal control ordinance was in the process of being updated last year, but the version conflicted with state law. So changes needed to be made and it was given to Smith to work out the details.
A meeting is scheduled Thursday to address concerns. Attending will be Sheriff Branham, the commissioners, a White River Humane Society representative, and Lawrence County Prosecutor Sam Arp. The goal is to work on the county’s ordinance to protect homeowners and their pets from vicious dogs.
Sheriff’s Department
Sheriff Mike Branham reported there were 163 inmates in the jail, of those 122 were males, 41 females, six Level 6 offenders and six Department of Correction hold and no parole holds.
Sheriff Branham and the Indiana Sheriffs’ Association announced during the month of May and June there will be roundtable meetings scheduled.
The ISA will be working with Lawrence County Sheriff Branham to facilitate these roundtable meetings.
Invited to the meeting will be representatives from Indiana Governor’s Officer, Indiana Attorney General’s Office, Indiana Homeland Security Office, Indiana Department of Corrections and the Executive Director for Drug Prevention Treatment and Enforcement.
The ISA will also be working with the sheriffs to invite their area legislators, local county office officials which includes judges, prosecutors, commissioners, and councilmembers.
The roundtable meeting in Bedford will be held today at the Sheriff’s Department from 10 a.m. until 12 p.m.
T&G Construction Inc. of Bedford had the lowest bid to install sewer grinders at the jail. Work should begin soon and will take about six months to complete.
Inmates have been flushing wrappers from items purchased from commissary, clothing and other things down the toilets at the jail thus clogging the city’s sewer lines. The grinders will stop the sewer blockage.
Sheriff Branham says the blockage has occurred several times this year. Many times blockage has been found blocks away from the jail, causing lines to back up in area businesses and homes.
T&G Construction submitted the lowest bid at $102,989. RQAW Corporation is overseeing the project.
Sheriff Branham asked if any progress was being made on repairs to the ramp outside of the department. Commissioner Dustin Gabhart reported he is having a hard time finding anyone who is willing to tackle the project. Sheriff’ Branham said he will speak to some contractors to come up with a solution.
Highway Department
Holmes says crews are preparing for the paving season which will be in full swing beginning after the July 4th holiday. Crews will be hot patching several roads before that time.
The Commissioners accepted the bid for a new boom mower. The old one was destroyed when it caught fire last year. Once ordered, it should take about three months to receive the boom mower.
Bridge
Flynn & Sons Construction was awarded the bid on Bridge 160 on Oolitic Road.
The bridge is over the abandoned railroad tracks near Knucklehead Bend. The plan is to take down the bridge, fill it in, and construct a road.
Bridge crews have been busying washing and replacing large culverts and clearing out brush and debris from county bridges.
INDOT bridge inspections will begin on June 10.
Emergency Management
Lawrence County Emergency Management Director Valerie Luchauer says she has been working on the county’s emergency management response plan.
Limestone Heritage Festival
Sarah Turpen, a member of the festival committee, requested permission to use the courthouse parking lot and lawn for the 2019 Limestone Heritage Festival. The commissioners approved her request. The parking area on the west side of the courthouse will be closed beginning at 5:30 p.m. on Thursday, June 27.
The festival is on Friday, June 28 – Saturday, June 29.
There will be food vendors J Street section of the Downtown Square. Live entertainment on the Harp Commons Stage Friday and Saturday, plus many other attractions.
The parade will step off Saturday, June 29 at 6 p.m. with the Downtown Fireworks display following at dusk.
Bedford Revitalization Inc. relies on Sponsorships to continue the tradition of the festival. The fireworks alone cost more than $8,500, and there are many other expenses associated with the festival. Please consider becoming a sponsor or making a donation. Donations can be mailed to:
BRI
Limestone Heritage Festival
PO Box 591
Bedford, IN 47421
or dropped off at Bedford Federal Savings Bank – Attention: Susan Gales.
Carpet in Superior Court II
Superior Court II Judge William Sleva asked permission to replace the carpet in the office area of his court.
He will get three bids and submit those to the commissioners.
Tree in Roadway
Mike Gifford addressed the commissioners about a large pine tree that fell and was pushed from the roadway and damaged his fence.
This happened in April, and Gifford wanted a schedule on when the tree will be removed and his fence repaired.
Commissioner Rodney Fish couldn’t give Gifford an exact time when the work would be done. But did say it was a top priority but will get done as soon as the schedule allows.