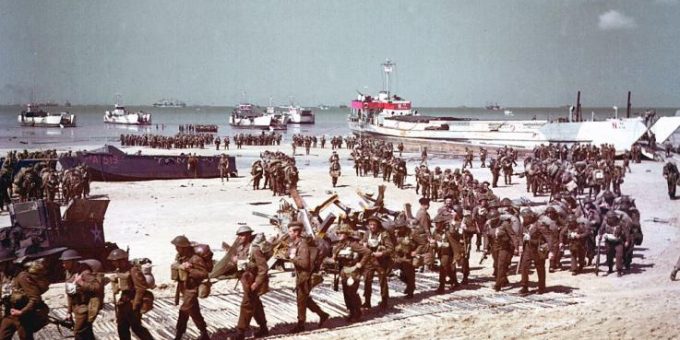 (BEDFORD) – In the United States, D-Day is celebrated in remembrance of the brave soldiers who landed on the beaches of Normandy, France on June 6, 1944. These American and Allied soldiers, some which were killed in action, fought to liberate northwestern Europe from Nazi occupation and bring an end to WWII in Europe.

“Every veteran is welcome to attend,” Bough added. “This celebration is not just for veterans in Lawrence County. We want to honor all of them.”
The 75th anniversary of D-Day celebration will be Thursday, June 6 at 11 a.m. on the lawn of the Lawrence County Courthouse lawn. The event will be moved inside if raining.

“We want to recognize the men and women of the greatest generation,” Bough says.

Terry Sanders, who was immediate past state commander for disabled American veterans, is the only person to ever serve in that position for two years. He will be the guest speaker during the event.

The John Wallace Chapter of Daughters of the American Revolution will be taking requests for certificates honoring the WWII veterans that day.
Veterans or family members may complete the request form on June 6. The certificates will be ordered and made available at a later date.

If a veteran or family member is unable to attend the event they can contact Martha Cox at 812-849-2432 or email her at tccox1@hotmail.com for a certificate request form.

Bough and the veterans would like to share what the times, rations, music, and the important women in the workforce – Rosie the Riveters during the event.

“It would be great to get a Rosie here, to have scouts help with the event and maybe even a music group to perform big band music,” Bough says.

The group is looking for volunteers to help with the event. Anyone that is wanting to be a part of the celebration can contact Brad Bough at the Veterans Affair Office at 812-275-6411.