(INDIANAPOLIS) – One-third of Americans have heard of 529 college savings plans but only one in five know what the plans are for. That’s according to a survey released by Indiana’s CollegeChoice 529 and the College Savings Plans Network (CSPN) on 529 Day.

The survey was conducted prior to the commencement of CSPN’s national 529 awareness campaign in March. Involving state treasurers, higher education agencies, financial service firms, and other state officials in 28 states, the campaign aims to make “529” a more recognizable term for Americans of various means.
“Student debt plagues Americans of all ages, and we are working to help reverse the crisis for future generations,” said Indiana Treasurer of State and CollegeChoice 529 Chair Kelly Mitchell. “You don’t need to make a lot of money to invest in a child’s educational goals. All it takes is consistently saving overtime with a 529.”
Conducted by the campaign in early 2019, the study found that those who are aware of 529s are much more likely to be saving for higher education. CollegeChoice 529 hopes the survey’s indication that a little knowledge can go a long way is a motivating factor this 529 Day. 529 Day is observed on May 29 (5/29) by state plans throughout the country as an opportunity to increase awareness of 529 college savings plans.
Similar to recent findings from other sources, 32 percent claimed to have heard of 529 college savings plans. When asked about the purpose of a 529, only 22 percent could connect the plans to education. Among those surveyed, the least aware age groups were 18- to 29-year-olds (27 percent) and those over age 60 (29 percent).
“The ongoing debate around how to minimize student loan debt is an important one,” said Troy Montigney, Executive Director of CollegeChoice 529. “Unlike other proposals, 529s are not hypothetical. Parents, grandparents, and anyone else can take matters into their own hands today to lessen what a child has to borrow and repay tomorrow.”
Based on assumptions built into the campaign’s 529 investment calculator, setting aside $10 a week over 18 years to invest in a 529 plan can add up to around $15,000 – about half the current average student debt upon graduation. Conversely, CSPN estimates the cost of not saving that amount, and having to borrow and repay with interest, would amount to $21,650 in student debt.
With CollegeChoice 529, the minimum contribution is just $10, and Indiana taxpayers may be eligible for a 20% state tax credit of up to $1,000 each year on their contributions. Participating employers may also enable workers to contribute directly to their CollegeChoice 529 accounts via direct deposit at no additional cost.
As of December 2018, according to CSPN, more than 13 million 529 accounts were open with an average amount saved of $22,500. The national campaign hopes to spark an increase in the total number of accounts by “making 529 as synonymous with college savings as 401(k) is with retirement,” as stated by Montigney. 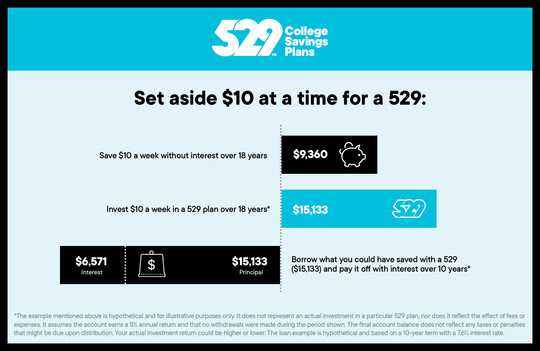 ABOUT COLLEGE CHOICE 529
CollegeChoice 529 is Indiana’s tax-advantaged, 529 education savings program and is offered and administered by the Indiana Education Savings Authority. CollegeChoice 529 includes the Direct, Advisor and CD Plans and has more than $4.8 billion in assets under management in over 370,000 accounts as of April 30, 2019. To learn more or enroll in the Direct Plan, call 1.866.485.9415 or visit www.collegechoicedirect.com to obtain a Disclosure Booklet, which includes information on investment objectives, risks, charges and expenses that should be read and considered carefully before investing.
ABOUT THE NATIONAL 529 CAMPAIGN
The “For Their Future Movement” involving 48 partners in 28 states and Washington, D.C., launched on March 4, 2019. The public-private partnership was formed on the basis of increasing awareness of 529s, which help families save for higher education and lessen reliance on student loans. The effort marks the first time that state plans and their partners have united to launch a national campaign. The partners’ 529 message is being amplified throughout 2019 and into 2020 under an agreement with Fred Rogers Productions. The campaign’s spots air before and after episodes of the PBS KIDS series Daniel Tiger’s Neighborhood.
529s are offered by most states and a private college consortium. Individuals are encouraged to read all plan offering materials – including information regarding minimum contribution amounts – in their entirety before making an investment decision.
ABOUT THE SURVEY
The CSPN National Awareness Benchmark Research survey was an online survey conducted by Bozell using Survey Monkey. The study was fielded Jan. 28 to Feb. 16, 2019. A total of 2,003 respondents completed the survey, providing for a +/-2.54 percent margin of error. Participants were recruited through the survey company and through social media invitations.