(MITCHELL) – On Saturday afternoon, Tunnleton’s own Marietta Bailiff told the “Story of Sam Bass”. Sam Bass was the son of Lawrence County’s own Daniel and Elizabeth Bass. Sam was one of seven children. Sam was born on July 21, 1851-and died July 21, 1878, at the age of 27 following a gun battle with the Texas Rangers. 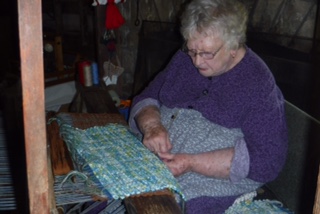 Marietta Bailiff Works placemats, and told visitors the ” Story of Sam Bass”
Sam failed a series of legitimate business practices, partly because he refused to go to school and get an education. Sam did not know how to read or write, even though his family tried his best to get him the knowledge he needed.
Sam turned to a life of crime. He joined a gang that robbed the Union Pacific Railroad gold train at San Francisco California, on September 18, 1877. The gang intercepted the train at Big Springs, Nebraska. The robbery netted the gang $60,000.
Shortly, after Bass formed his gang (in Texas), which staged a string of robberies, in 1878, the gang held up two stagecoaches and four trains within 25 miles of Dallas, TX. They became the object of a manhunt by the Pinkerton National Detective Agency agents and Texas Rangers headed by Junius Peak.
Bass was able to elude the Texas Rangers until a member of his gang Jim Murphy, turned informant. Mr. Murphy’s father was very ill at the time, had been taken into custody and held for questioning. He was not allowed to be seen by a doctor and was prevented from receiving medical treatment, which caused his condition to worsen rapidly. Lawmen sent a message to Murphy informing him that they had his father in custody and that if Murphy did not agree to meet with them, they would continue to withhold medical treatment from his father. Knowing how sick his father was, they agreed to the meeting. There, he reluctantly agreed to turn informant. John B. Jones was subsequently notified of Bass’s movements and set up an ambush at Round Rock, Texas, where Bass and the gang planned to rob the Williamson County Bank.
On July 19, 1878, Bass and his gang were scouting the area before the robbery. When they bought some tobacco at a store, they were noticed by Williamson County Deputy Sheriff A.W. Grimes. When Grimes approached the men to request that they surrender their sidearms, he was shot and killed. As Bass attempted to flee, he was shot by Texas Rangers George Herold and Sergeant Richard Ware. Soapy Smith and his cousin, Edwin witnessed Ware’s shot.
Snappy exclaimed, “I think you got him.”
An interesting note to all this is the fact that no one in Round Rock, or any visiting Texas Rangers, except Jim Murphy, knew what any of the Bass gang looked like. After Seaborne Barnes was killed and lay in the street, Ware had to have Murphy identify the body, as no one else knew who the man was. Ware himself stated that he had seen the same three men earlier in town crossing the street to enter the dry goods store, but in fact, did not recognize them as the Bass Gang. 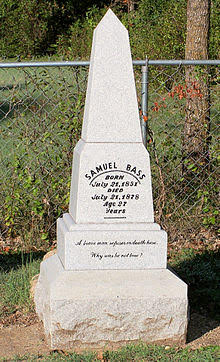 Bass is buried in Round Rock, Texas; his gravestone over the years was damaged at the hands of souvenir collectors. According to Bailiff, the Marble Stone was finally replaced with a concrete stone to keep the gravestone from being damaged by collectors hopefully.
Local Mitchell resident, Jeff Routh was in attendance of the history lesson. When Mrs. Bailiff asked whether anyone been to Round Rock, TX, Routh was able to provide details of the cemetery, and many festivals the town had in Round Rock, TX. (Information provided by Marietta Bailiff, from newspaper accounts Mitchell and Orleans Tribune, and Frontier Times, Story of Sam Bass) 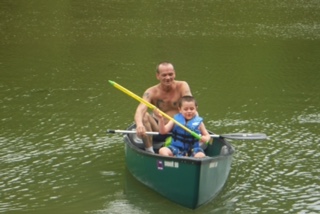 Spring Mill State Park offers the enactment every Memorial Day Weekend and will have one next year. The Park provided tours of the mill, and the history of Hamer Mill who was industrialist, who went all the way to New Orleans, from the White River, Ohio and Mississippi Rivers, and came back on horses after selling the lumber from their flatboats. 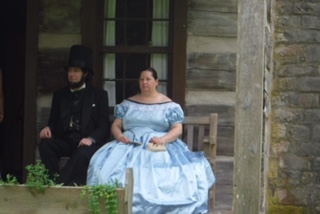 Matthew and Sonya Miller of Mitchell appear as Abraham and Nancy Lincoln.
A Pioneer Memorial Day Service was held on Monday, afternoon, and many other historical activities were held throughout the whole weekend. 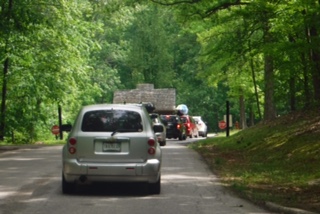