(NEW ALBANY) – A five-vehicle crash claimed the lives of a Scottsburg man and woman and sent three others to the hospital. 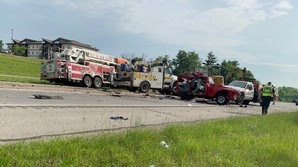 The preliminary investigation reveals that at approximately 8:08 a.m. this morning, eastbound traffic on I-265 was diverted off at the Charlestown Road exit due to a large sinkhole that had developed overnight in the roadway near the five mile-marker. Near the 3.4 mile-marker traffic was slowing and stopping due to that diversion and rush hour traffic. As traffic stopped, a 2011 International DuraStar work truck failed to stop and collided with the rear of a Chevrolet pickup truck, causing a chain reaction of crashes involving three additional vehicles.
New Albany Police units were the first to arrive on-scene and soon requested the assistance of the Indiana State Police including crash reconstructionist who assumed the investigation.
ISP Investigators believe that the 2011 International, driven by 22-year-old Brady E. McAfee of Depauw, Indiana, first collided with a 2008 Chevrolet pickup truck, which in turn struck a maroon 2000 Ford F-150 pickup truck.
That vehicle then collided with a white 2012 Ford pickup truck hauling an equipment trailer loaded with a mini-excavator, which then struck a 2017 Ford Fiesta. McAfee was uninjured.
The driver of the maroon 2000 Ford F-150, 42-year-old Douglas E. Borders, of Scottsburg, Indiana, and his passenger, 36-year-old Christina M. Coy, also of Scottsburg, were both pronounced dead at the scene by the Floyd County Coroner’s Office.
The driver and passenger of the Red Chevrolet Pickup truck, 39-year-old Robert Schultz and 40-year-old Myra Schultz, of Elizabeth, Indiana, were transported to the University of Louisville Hospital with non-life-threatening injuries.
The driver of the gray Ford Fiesta, 28-year-old Maria Bernabe of New Albany, Indiana, was transported to Baptist Floyd in New Albany, also with non-life-threatening injuries.
The driver of the white 2012 Ford pickup truck, Nevin Saltsgaver, and his passenger, Jacob Saltsgaver, both of Leavenworth, Indiana, were uninjured in the crash.
The Indiana State Police was assisted by units from the New Albany Police Department, The New Albany Fire Department, and the Floyd County Coroner’s Office.
This investigation is on-going. I-265 remained closed at the scene of the crash until approximately 2:30 p.m.