(BEDFORD) – The Bedford Board of Works had a full agenda Monday afternoon, with several items of business to address.

They approved many of the requests, including a walkway path on Oolitic Road. The pathway will be constructed once Bridge 160 is removed.
The bridge is being taken down and the area filled in with dirt. 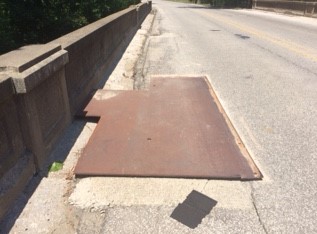 A walkway has been approved once Bridge 160 is eliminated on Oolitic Road. A sidewalk from 5th Street to Wiley Park will be located on the west side of the street to protect pedestrian traffic.
City of Bedford and county officials agree to extend the sidewalk from 5th Street along Lincoln Avenue to Wiley Park. The path will be constructed on the west side of the roadway.
The cost for the project without the walking path is $258,660 and with the walking path $296,333. The City of Bedford will pay approximately $37,673 to build it.
In other business:
The board approved a request by Leanne Coffman from Safety Training Solution Company to place four signs warning motorists of heavy equipment workers in the area of 30th and R Streets. Both Aritechual Stone and Elliott Stone Company will pay for the signs.
The board approved a request from the Utilities Department to sign a contract with Invoice Cloud. The cost is $400 a month. The online billing service will include new features for utility customers, including text alerts and disconnection notification.
A Service and Maintenance agreement for ten years was approved by the board for Stonegate Arts and Education Center, after considering a five, ten or twenty-year service agreement. It was agreed to go with the ten-year major maintenance plan by going with the ten-year plan, with a savings of approximately 3 percent.
Bedford Police Chief Terry Moore advised the Board of Works that the roof needs replaced at the Police Department because it is leaking. The board approved the lowest bid submitted from Bunkum Valley Roofing in Loogootee of $17,160. Work will begin around June.
The board approved a request from Gary Ray to split a lot at 612 Central Avenue. The Planning Commission approved the application at their May 14th meeting, and there was no opposition to the project at the public meeting.
The board approved a request by Regency Properties to subdivide the property at 3315 and 3313 16th Street, the site of Verizon and Subway from the rest of the Regency Properties.
The board approved a request from Bedford Police Chief Terry Moore to enter into an agreement with the Lawrence County Sheriff’s Department to share the proceeds of an Operation Pullover Grant. This grant will be used to pay
overtime for Operation Pullover and DUI Task Force. Chief Moore stated they tried to apply for the grant through the Indiana Criminal Justice Institute; however, the organization no longer awards grants to individual departments. Both departments will split the grant.
Kyle Myers from Lochmuller Group updated the Board of Works on the Lincoln Avenue Sewer Project. A credit of $15,290 was given in regards to some work at the North N Street Pump Station. Additional cost occurred at the 5th Street and Lincoln Avenue project when a sewer collapse on a sewer line and a tap line located at a residence east of the site had to be repaired. The Board of Works approved the additional cost of $157,931.25. 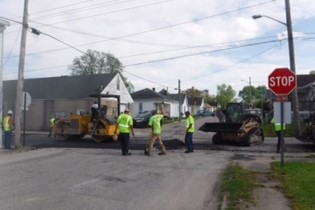 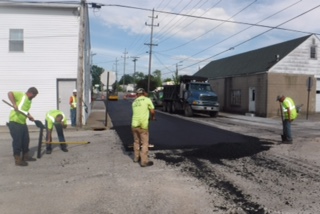 The board approved an easement for the Lawrence County Boys and Girls Club to install a fiber optic between the Parkview Primary, the Teen Center at 1830 16th Street, and Limestone Unit at 2009 19th Street. This technology will help facilitate learning programs and is a part of the 20th Century Scholars Program.
The Board of Works tabled action on considering an easement or license in regards to an exhaust fan overhanging in an alley between 15th and 16th Street by the Limestone Café. Limestone Café installed a new exhaust fan in the kitchen to eliminate odors and to keep those odors away from the apartments above the business. It was because of those apartments that the exhaust fan was extended outward instead of upward. The fan extends 2-3 inches out in the alley. 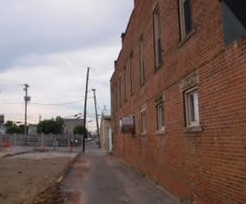 An exhaust fan in the alley between 15th and 16th Streets at the Limestone Cafe is subject to easement or license. The matter was tabled this evening pending State approval of widening the alley 2 to 3 feet.
Dan Kirk had concerns about the exhaust fan and the city’s liability if the fan was struck by a vehicle.
Bill Durham, owner of Limestone Café told the board he would be willing with finding a solution to prevent an accident.
City Attorney Greg Pittman explained to the Board the difference between an easement, and license. An easement would eliminate the city rights to address future issues with the exhaust fan, whereas license can give the city future say, as well as list additional recommendations or orders in addressing the issue. The city attorney recommendation was to go with a license and make other safety recommendations.
Bedford Federal who purchased the former Jenkins Property reported they have applied to the state to widen the existing alley approximately 2 to 3 fee. At this time they are waiting on approval from the state. The Board of Works tabled the request pending state approval.