(CORYDON) – On Tuesday, at approximately 5:30 p.m., emergency personnel were dispatched to the baseball fields at the Friends of Harrison County Youth Sports Complex, located at 167 Jenkins Court Northeast, in reference to a man allegedly battering a child.

Trooper Jeremy Simcoe was first to arrive on the scene and was met by several parents who stated that the man, later identified as Brian S. Hayse, 46, Mauckport, and the young boy were inside Hayse’s black Ford pickup truck in the complex parking lot.
Trooper Simcoe was advised that parents had moved their vehicles to block the exit to the parking lot to prevent Hayse from leaving before police arrived.
As a result of the investigation, Trooper Simcoe and other responding officers determined that Hayse struck the child in the face and buttocks repeatedly and that the child had visible marks on both his face and buttocks. The investigation further determined that the incident allegedly began because the child spilled a drink inside of Hayse’s pickup truck.
Brian S. Hayse was arrested at the scene by Trooper Simcoe and transported to the Harrison County Jail. 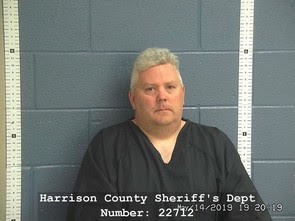 Brian S. Hayse is charged with domestic battery, a Level 5 Felony.
Trooper Simcoe was assisted by officers from the Corydon City Police Department and the Harrison County Sheriff’s Department.