(INDIANAPOLIS) – Longtime US Sen. Richard Lugar was hailed for being a peacemaker as a two-day tribute began Tuesday with a military honor guard leading his flag-draped casket into the Indiana Statehouse Rotunda. 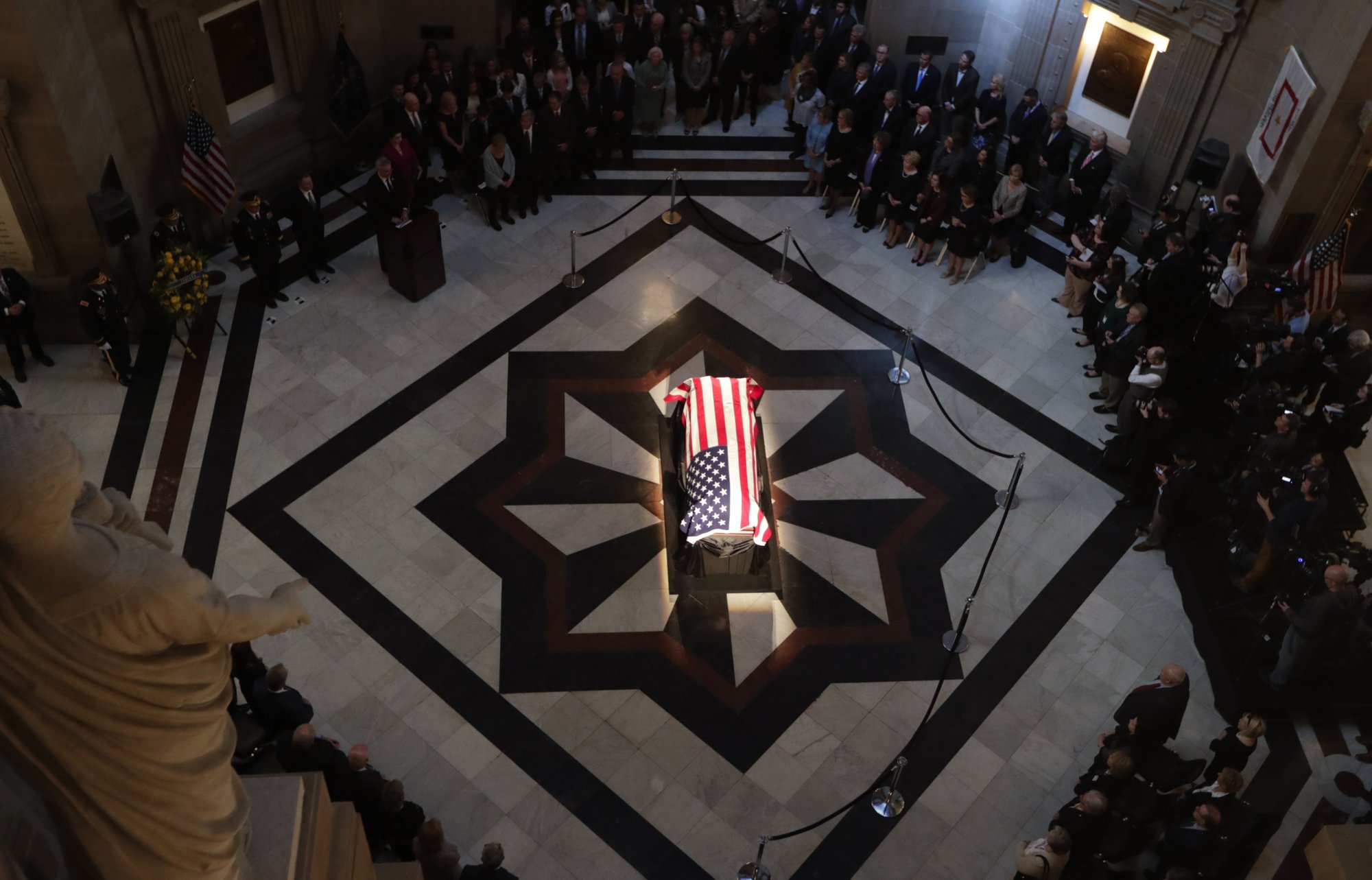 The casket of Sen. Richard Lugar is illuminated in the Indiana Statehouse rotunda in Indianapolis, Tuesday, May 14, 2019. Lugar was a longtime Republican senator and former Indianapolis mayor who’s been hailed as an “American statesman” since he died April 28 at age 87. (AP Photo/Michael Conroy)
Tom Davies, of the Associated Press reports, a couple of hundred people gathered with Lugar’s wife, Charlene, and other family members for the Statehouse ceremony after which he was to lie in repose for 24 hours ahead of his funeral on Wednesday.
Lugar was a leading Republican voice on foreign policy matters during his 36 years in the U.S. Senate, with his leading achievement being his work helping spur the dismantling of thousands of former Soviet nuclear weapons after the Cold War ended. Lugar, who was Indianapolis mayor for eight years before his first Senate election win in 1976, died April 28 at age 87.
“In his love and through his courage, Richard Lugar helped bring more peace to an increasingly dangerous world,” Indianapolis Mayor Joe Hogsett said. “He did so in every nuclear, chemical and biological weapon disarmed.”
Indiana Gov. Eric Holcomb and Hogsett placed wreaths with sashes reading “Indiana” and “Indianapolis” next to Lugar’s casket as public viewing began in the Statehouse.
Vice President Mike Pence will be traveling to his home state for Wednesday’s funeral.
Pence said in a Twitter post that Lugar was “an American statesman whose contributions to our nation are countless.” The former Indiana governor said he would deliver a eulogy for a “great man who inspired so many in public service — including me.”
Hogsett, a Democrat, extoled Lugar for his willingness to work across the partisan divide and alluded to the senator’s cerebral and soft-spoken nature.
“He fought hatred, he did not court it,” Hogsett said. “He calmed fear, he did not attempt to use it. He extinguished violence, he did not countenance it.”
Lugar was a reliable conservative vote in the Senate, but he worked closely with Democratic Georgia Sen. Sam Nunn in the early 1990s to launch the program under which the U.S. paid to dismantle and secure weapons in the former Soviet states. The Nunn-Lugar program led to about 7,600 Soviet nuclear warheads being deactivated and the destruction of more than 900 intercontinental ballistic missiles by the time Lugar left office in 2013, according to U.S. military figures.
Lugar worked with Barack Obama after the future Democratic president entered the Senate in 2005, taking Obama with him to Russia, Ukraine and Azerbaijan to visit weapon dismantlement sites. Lugar’s cooperation with Obama, however, became a political handicap as his Senate career ended with a 2012 Republican primary loss to a tea party favorite.
Obama awarded Lugar the Presidential Medal of Freedom, the nation’s highest civilian honor, soon after he left the Senate in 2013. Obama praised Lugar after his death as exhibiting “the truth that common courtesy can speak across cultures.”
“In Dick, I saw someone who wasn’t a Republican or Democrat first, but a problem-solver — an example of the impact a public servant can make by eschewing partisan divisiveness to instead focus on common ground,” Obama said.
Indiana’s governor on Tuesday credited Lugar with a long life of service to his state and country.
“As we gather to say goodbye, it’s our job to carry that torch that this mighty man lived,” Holcomb said.