(CLARKSVILLE) – On Monday, shortly after 7 p.m., Indiana State Police units from the Sellersburg Post were dispatched to a crash on Eastern Boulevard and US 31 in Clarksville to investigate a collision in which a marked Jeffersonville Police cruiser had been “T-boned” by a white Chevrolet pickup truck.

During the crash investigation, both drivers were transported by ambulance with non-life threatening injuries to area hospitals. The driver of the white pickup, 35-year-old Gary Vincent Crowe Jr., of Clarksville, was transported to an area hospital in Louisville to be examined and also to obtain a blood-draw for possible OWI charges. 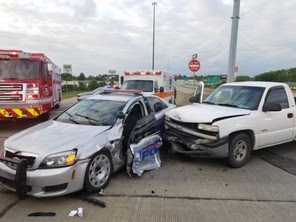 Once at the hospital it is alleged that Gary Crowe Jr. fled upon arrival. He was later apprehended by officers with the St. Matthews Police Department and transported to the University of Louisville Hospital for completion of the testing.
A warrant was subsequently issued in Indiana for Crowe. St. Mathews Police then arrested Gary Crowe on the warrant, and he was remanded into the custody of Metro Corrections in Louisville, KY. on charges of OWI causing bodily injury – Level 6 Felony, obstruction of justice – Level 6 Felony, and misdemeanor charges of OWI endangerment and reckless driving.
Officer Hunter Powell of the Jeffersonville Police Department was driving the fully-marked police cruiser at the time of the crash. Officer Hunter was released from the hospital and is recovering at home with his family.
This investigation is ongoing. Indiana State Police Troopers were assisted by units from the Clarksville Police Department, the Clarksville Fire Department, and the Jeffersonville Police Department.