(INDIANAPOLIS) – The family of former U.S. Sen. Richard Lugar says those wishing to attend his funeral Wednesday must register in advance. 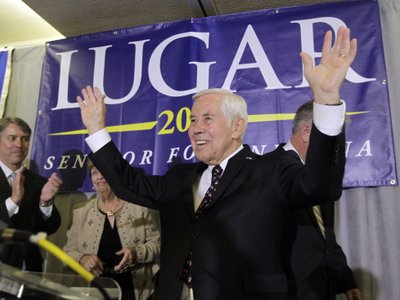 Sen. Richard Lugar reacts after giving a speech, in Indianapolis. Former Indiana Sen. Richard Lugar, a Republican foreign policy sage known for leading efforts to help the former Soviet states dismantle and secure much of their nuclear arsenal, died Sunday, April 28, 2019 at the Inova Fairfax Heart and Vascular Institute in Virginia. He was 87. (AP Photo/Darron Cummings, File)
The Lugar Center in Washington announced Friday people can register at an online link or at www.thelugarcenter.org .
The family says it will notify those requesting seats via email with details about attendance or if all the seats have been taken.
The funeral will be held at St. Luke’s United Methodist Church in Indianapolis.
The family now says it will greet callers while Lugar lies in state in the Statehouse Rotunda from 12:30 p.m. to 2:30 p.m. on Tuesday. That’s a change from earlier hours it announced.
The six-term senator and former Indianapolis mayor died April 28 at age 87.