(NEW ALBANY) – Detectives and crime scene technicians from the Indiana State Police in Sellersburg are investigating a police-involved shooting that occurred on Saturday between a New Albany man and officers from the New Albany Police Department.

Results from a preliminary investigation revealed that shortly after 1 p.m. Saturday, New Albany Police was dispatched to the residence located at 106 South Bohannon Lane in reference to a welfare check on a male subject. 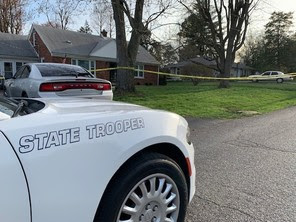 When officers arrived on the scene, they attempted to make contact with the male, 36-year-old Benjamin B. Lucas, to determine his well-being. Soon after making contact, officers near the front of the residence were fired upon from within the house. Lucas then exited the rear door of the residence where there was an exchange of gunfire with officers. Lucas was then struck by gunfire.
New Albany officers rendered first aid to Lucas who was transported to U of L Hospital by EMS. Benjamin Lucas was pronounced dead at approximately 2:48 p.m., shortly after arriving at the hospital.
Detectives from the Indiana State Police – Sellersburg Post responded to the scene and became the lead investigating agency. Units were assisted by the Floyd County Sheriff’s Department.
The names of the New Albany officers involved will be released at a later time.
An autopsy was scheduled for Sunday with the Kentucky Medical Examiner.
This investigation is ongoing.