(CLINTON) – Indiana State Police’s ongoing investigation has resulted in the arrest of a suspected drunk driver, who allegedly rammed his truck into a Clinton police officer.

Just after 9 p.m. Saturday, police say they received two calls for a possible drunk driver who was all over the road. An officer responded to Hazelbluff Road, just east of State Road 63, where he found the suspected truck, later found to be driven by Craig R. Boradach, 49, of Paris Illinois. 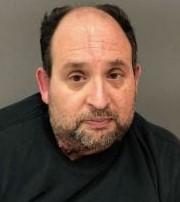 As the truck traveled toward him, the officer stopped his patrol car with all emergency lights on and attempted to get out of the vehicle. That’s when he was allegedly struck by Boradach’s truck and pinned between his police car and the truck itself. While pinned, police say the officer shot at Boradach, hitting him twice.
A short time later, Vermillion County EMS arrived on scene and freed the officer from between the vehicles. Police say both Boradach and the officer received first aid before being transported to Union Hospital Clinton.
The officer was treated at the hospital and released. Boradach was flown to Methodist Hospital in Indianapolis.
Late Monday afternoon, police say they arrested Boradach after he was released from the hospital. He’s currently facing charges of battery on a law enforcement officer, operating a motor vehicle while intoxicated resulting in bodily injury and operating a motor vehicle while intoxicated.
The Clinton officer involved was John Alkire, a three-and-half year veteran of the department. Alkire is on paid administrative leave as the investigation continues. Indiana State Police say the officer’s identity was released per the request of Clinton P.D. Chief Billy MacLaren.
Information Fox59 News, https://fox59.com