(OOLITIC) – The Oolitic Town Council met at 6:30 p.m. at Town Hall with four members present. President Bill Kendall was unable to attend, and Phil Hensley was welcomed as a new board member following an unexpected vacancy in the board.

Hensley, who works for Weather Masters, was appointed by the Republican Party to fill the vacancy. 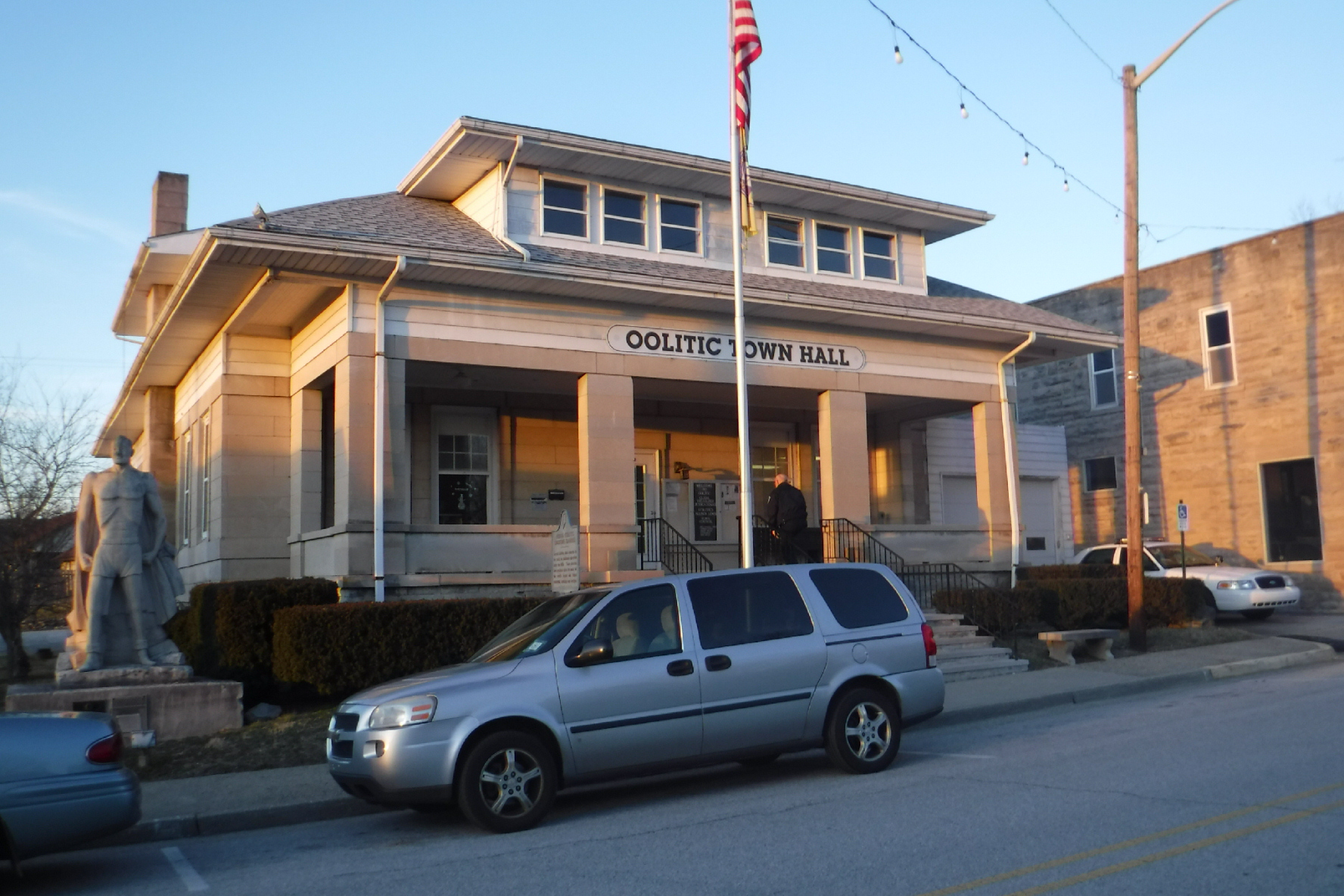 The boards first order of business was to approve the hiring of a deputy marshal. Nick Curlo was hired by the Bedford Police Department, which left only Town Marshal Jon Jefferies.
Ted Maze agreed to be a deputy town marshal. The public asked how he was able to both be fire chief and serve as a deputy marshal.
Councilman Sears stated that Maze knows the roles and responsibilities. Maze’s priority will be to serve as deputy marshal first.
The council approved his hiring with a 3-1 vote. Glen Gross was the only no vote.
Maze must complete a 40-hour course before starting. The course will start mid-March and be conducted by the Lawrence County Police Department.
—
Officials sold one vehicle that was in surplus. Two other vehicles will be advertised for bids. A problem with paperwork prevented the selling of the other two vehicles.
The council tabled a bid from Chimney Services to either tear down the chimneys or re-cap them at Town Hall. The council felt the prices were too high and will seek out contractors on bids to also, either re-cap or go ahead and tear them down.
Currently, none of the three chimney’s are being used, as furnaces are heating Town Hall.
—
The curb at 5th Street is now marked for school buses. This was completed by street department crews.
Glen Gross asked about water issues affecting the town. The area of 600 Block of 9th Street is having trouble accessing the problem due to current weather conditions. Hopefully, Bedford crews will be able to help when the weather clears up. Water is backing up in the area.
Water issues are also occurring at Vista Drive and Patton Hill Road. Runoff is causing some safety issues at the intersection and from runoff from the quarry.
Also, a culvert full of weeds is causing issues at Vista and Nikirk. This is across from Jenkins Garage. And at Vista and Park, a 4-inch drain needs to be cleaned out. It fills back and is creating some water issues.
The council will meet in executive session on March 12th at 4 p.m. to address the old Oolitic School.
—
Glen Gross wants to make sure vacation requests are turned in properly. This is mandated by the State of Indiana, and Gross wants to make sure the vacation policy is followed.
—
Gross also asked Town Marshal Jefferies to start enforcing ordinances on unregistered vehicles, trash and other ordinance violations in the neighborhood.
—
Phil Hensley wanted to make sure the fire hydrant at Oak and Seventh was taken care of. The water department is waiting for the ground to dry up before it is replaced. The total cost for the replacement is $1,900.
A quote from McClister was taken under advisement for the maintenance of the generators at the Waste Water Treatment Plant. There were quotes for a one-year, and three-year contract. However, in looking at the bids, there was no cost reduction in the signing a 3-year contract. The board tabled the request. The generators provide back up power in the event of a power outage at the plant.
—
A roadblock was approved by the board in November; this is the regular Children’s Christmas Fund.
—
Gordon Hutchens asked the council how much the Convention of Candidates will cost the town for the upcoming election.
According to Town Clerk Jessica Staggs, “there will be no additional costs, Billie Tumey will provide voting boxes, the Convention will be by paper ballots.”
Cindy Grow Oolitic Precinct Committee person will oversee it, and the Republican Party will appoint one other person to help and provide a list of eligible voters.
—
Grow wanted to know if there could be a vote on whether we have a Convention or Primary, as well as continue with At- Large Seats or Wards.
According to Dirks Sears, following the last Census, the Town did not act on the information and created the issue Oolitic is experiencing at this time.
—
Dan Brooks also questioned why residents have to sign in at meetings to address the council. Dirks Sears responded by saying it adds structure and order to the meetings.
He then questioned why brush was not being picked up on time. Brush pick up is on the 2nd and 4th Tuesday’s of the month.
Sears stated the three-member crews have been busy dealing with water leaks and other issues within the town. With the size of the town and issues that they have been experiencing they have been doing a very great job.
—
Ted Maze addressed the board stating they have five weather radio’s available for the elderly, veterans, disabled, or several small children. The fire department can deliver and program them for free. They must reside in town and will be given on a first come and first serve basis. You can contact the fire department by calling 812-329-6997.
—
Leah Gross then addressed the board concerning the fire department posting about the insurance companies who do not recognize ISO fire protection ratings.
The major insurance companies like State Farm And Farm Bureau do not recognize the ISO fire protection ratings according to a posting by the Oolitic Fire Department.
Gross in her statement stated the insurances companies she contacted stated that ISO is no longer a consideration in writing homeowners policies.
Bloomington’s Fire Protection Rating is a 2, Bedford’s Fire Protection Ratings is a 4, and Oolitic’s Rating is a 6.
Ted Maze stated, “there are other insurance companies who still recognize the ratings.”
Leah Gross also questioned why not all the council members were consulted in the discussion about hiring Ted Maze as deputy marshal.
Councilman Dirk Sears responded by stating “Duly Noted.”
The meeting then was adjourned following the members signing related paperwork.