(OOLITIC) – On Friday, after receiving information that a wanted person was staying at a residence in Oolitic, State Troopers along with the Mitchell Police Department confirmed that 39-year-old Travis East, of Bedford, was wanted on five active criminal warrants through Bartholomew County. 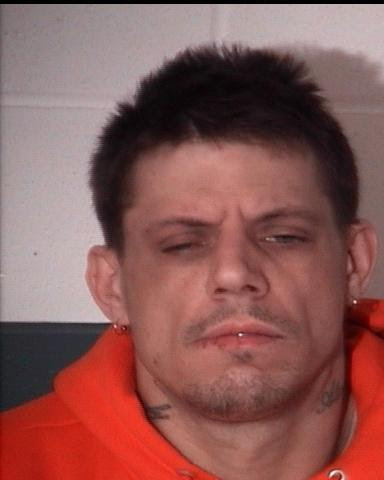 Travis East
When officers arrived at the residence located at 1019 Lafayette Ave, Trooper Richard Klun and other officers made contact with two occupants who told them Travis East was in a back bedroom.
Law enforcement made loud verbal commands for East to exit the residence in which he failed to comply. After retrieving his K9 Partner Loki, Trooper Klun gave East multiple additional warnings that a K9 would be deployed if he did not exit the home. 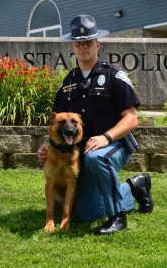 ISP Trooper Richard Klun and K9 Partner Loki
East again failed to follow law enforcement commands to exit the residence as instructed, and K9 Loki was deployed to apprehend East. Loki was successful in locating East in a back bedroom and held him until Law Enforcement could take East into custody. East received medical treatment at the scene and was then transported to a hospital in accordance with department protocol.
East was ultimately medically cleared and incarcerated at the Lawrence County jail on the five active warrants and a local charge of Resisting Law Enforcement.