Shew says adult and juvenile nonviolent offenders placed on electronic monitoring saves the county in inmate house costs.
Shew reported 8,247 people were placed on electronic monitoring or house arrest during Oct. 1 – Dec. 31.
“The cost savings to the county in jail cost for those adult individuals is $53.99 a day – what it would cost to house them at DOC (Department of Corrections) would be more than $445,200,” Shew added.
The cost to house a juvenile at a juvenile detention center is $135 a day. The court sentenced 397 juveniles to house arrest during that same timeframe saving the county $53,595.
Thanks to community correction programs nonviolent offenders lower the number of inmates at the jail helping with overcrowding and also allows those men and woman to work and support their families.
On Tuesday morning Sheriff Mike Branham reported there were 138 inmates in the jail. Of those 108 were males, 30 females, six Department of Correction holds, nine Level 6 offenders and one parole hold.
In other business:
Sheriff Branham reported the department was awarded a more than $63,000 JAG Byrne Officer Safety and Wellness grant. The funds will be used to update the department’s safety and wellness policies and training of deputies and jail officers.
Sheriff Branham says the policies and procedures have not been updated since 2000.
The Sheriff has been working with county attorney David Smith, the prosecutor’s office to update the county’s animal control ordinance. The ordinance has not been updated for more than 20 years.
Officials will be looking into repairing the ramp in front of the department.
Sheriff Branham says the concrete is becoming brittle and a hazard.
_ _ _
Lesley Lodmell, Lawrence County Extension Director, introduced Sarah Richer, the Health and Human Sciences Educator. 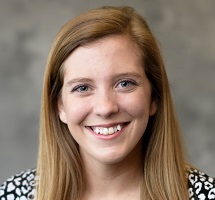 Sarah Richer
Richer is working with those at Centerstone on “Where Does Your Money Go.” A program that allows adults to rethink their spending so they can reach financial stability. Participants will learn how to examine their spending habits, make changes to eliminate those spending “leaks”, and create a realistic budget to help meet financial goals. Whether your goal is paying off debt, saving for retirement or just making it until next payday without running out of money.
She is also presenting “Captain Cash” to third graders in Mitchell. “Captain Cash” is an interactive educational program designed to teach basic financial management skills. This is a series of four lessons: Earning, Saving, Spending, and Borrowing.
_ _ _
Marc Huffman, with Bedford Masonic Lodge 14 requested to use the courthouse square on Saturday, May 11 for a motorcycle show and ride.
Huffman is expecting 150 to 250 bikes and riders to attend the event which will raise funds for the lodge’s community projects and make needed repairs to the more than 100-year-old lodge located on 15th Street.
The event will run from 9:30 a.m. with kickstands up at 1 p.m. and returning to the square around 5 p.m.
The event will not interfere with the farmers market.
_ _ _
Lawrence County Highway Superintendent David Holmes says crews are busy cleaning up debris and dealing with road washouts from floodwaters.
Crews will be looking into a report of a log jam at Indian Creek bridge on Williams Silverville Road.
Holmes told the commissioners the primary engineering phase for the federal retro-reflective signage for District 1 is underway. The county received $552,240 in federal transportation funds to replace road signs to meet the latest federal retro-reflective standards set by the Federal Highway Administration. These funds will not replace road name signs.
County officials will view a boom mower demonstration on Monday, March 18th. The county lost its mower when it caught fire.
Holmes reminded the commissioners that paving bids were out and due on March 19.