(VEVAY) – A southeastern Indiana police chief has died in a single-vehicle crash. 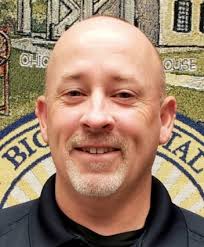 The Switzerland County Sheriff’s Office says 49-year-old Rising Sun Police Chief David Hewitt died at a hospital following the crash about 7:20 a.m. Wednesday on Indiana 56 outside Vevay. The crash remains under investigation but icy road conditions are believed to have been a factor.
Rising Sun Mayor Brent Bascom says the 49-year-old Hewitt worked in law enforcement for 27 years. He had been with the Dearborn County Sheriff’s Department and the Lawrenceburg Police Department before joining the Rising Sun department. He ordered flags in the city to be lowered to half-staff for 27 days.