(SCOTT CO.) – A single-vehicle crash and arrest for operating a vehicle while intoxicated started a series of three crashes that involved 10 vehicles and sent four people to area hospitals.

Around noon on Friday, the Indiana State Police received calls reporting a White Mitsubishi Eclipse driving erratically northbound on I-65 near Scottsburg.
At approximately 12:07 p.m. that same vehicle crashed into the guardrail on the right side of I-65 northbound at the 34.5 mile-marker before crossing back over both lanes and colliding into the median guardrail and coming to a stop.
The driver, 37-year-old Lindsay R. Bostock, of Sellersburg, was arrested on a charge of operating a vehicle while intoxicated. Troopers believed opioids were a factor in this crash.
As traffic backed up from the above crash scene, a three-vehicle property damage crash occurred on I-65 northbound at the 32.7 mile-marker at approximately 12:50 p.m.
Then, at 1:03 pm, a six-vehicle injury crash was reported one mile south at the 31 mile-marker. Troopers on scene then requested the assistance of Indiana State Police crash reconstructionists.
The preliminary investigation reveals that as traffic was at a standstill due to the second crash scene, a 2003 International tractor-trailer collided into the rear of a line of stopped cars, creating a chain reaction of rear-end collisions involving five more vehicles. 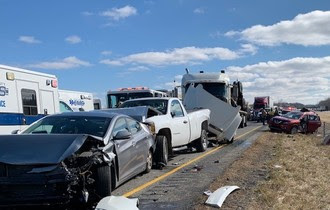 As a result of this collision, 75-year-old Michael L. Brown, of Scottsburg, and 22-year-old Micayla Kelly, of Danville, Kentucky, each in separate vehicles, were transported by ambulance to Schneck Medical Center in Seymour where they were treated and released.
Jerry K. Pyle and his wife, Gwyneth C. Pyle, of Stanford, Kentucky, were transported by air to the University of Louisville Hospital for serious injuries.
During the subsequent investigation, the driver of the tractor-trailer, 46-year-old David Ray Wisdom, of Lawrenceburg, Tennessee was found to be in possession of meth and drug paraphernalia. Wisdom was arrested and remanded into the Scott County Jail and on charges of possession of meth and possession of drug paraphernalia and maintaining a common nuisance.
This crash is still under investigation and toxicology results are pending in both arrests.
Indiana State Police Troopers were assisted by the Scott County Sheriff’s Department, The Scottsburg City Police Department, The Scottsburg Fire Department, and Scott County EMS.