(CLARK CO.) – On Wednesday at approximately 11:47 a.m., a Sellersburg father was killed as he was stopped in traffic following a prior crash on Interstate 65 southbound.

A preliminary investigation reveals traffic was backed up on I-65 southbound due to a semi tractor-trailer crash which occurred earlier in the morning near the 5.2 mile-marker. That crash had traffic backed up as far as the 6.5-mile marker.
A gray, 2017 Ford Fiesta, driven by 36-year-old Carl Edward Benham II of Sellersburg was stopped at the rear of the back-up behind a semi tractor-trailer which was also stopped in traffic. As both vehicles sat stationary, a white, 2017 Nissan van, driven by 28-year-old Ryan M. Mosley of Louisville, KY failed to stop and struck the gray Nissan, pushing it into the rear of the stationary semi-trailer. 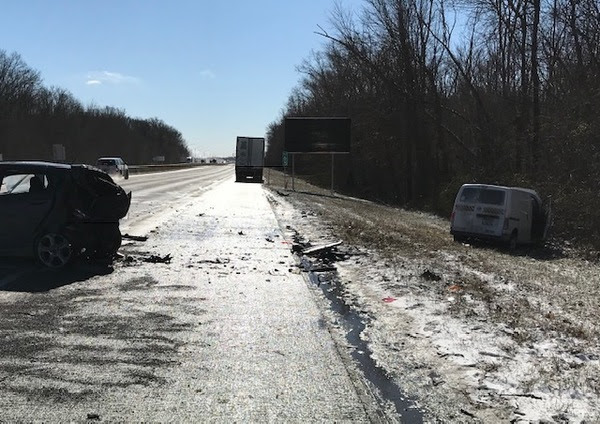 Benham sustained life-threatening injuries as a result of the collision and was rushed to the University Of Louisville Hospital by ambulance. Carl Benham succumbed to his injuries and was pronounced dead upon his arrival.
I-65 southbound traffic was diverted off the interstate at the nine mile-marker and remained closed until approximately 2 p.m. while Indiana State Police Troopers and reconstructionist investigated the crash. The crash remains under investigation at this time.
Indiana State Police units were assisted by the Clark County Sheriff’s Department, the Clarksville Fire Department, The Sellersburg Fire Department, The Clarksville Police Department, and Yellow Ambulance.