(BEDFORD) – A Paoli man was arrested Tuesday morning after Bedford Police stopped him for a traffic violation. 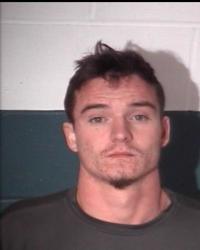 Officers stopped 22-year-old Jacob Cook’s black Chevrolet Impala at Mitchell Road and 32nd Street just after midnight.
Cook had been weaving between lanes and making sudden stops.
Bedford Chief Terry Moore says there were several other people in Cook’s car.
Officers received consent from Cook to search the vehicle. During that search, officers found a digital scale with a white powdery substance on it near the driver’s seat that tested positive for crystal meth and found that Cook had concealed meth under his pant leg.
Cook admitted the meth belonged to him. The others in the vehicle were released.
Cook was arrested on charges of dealing meth greater than 10 grams and issued a warning for unsafe lane changes. He is being held in the Lawrence County Jail on a $20,005 cash or surety bond.