Thomas Edward Harder – Shoals
February 13, 1929 – January 20, 2019
Thomas Edward Harder, 89, of Shoals, passed away at his residence on Sunday, January 20, 2019.
He was born in Lost River Township on February 13, 1929, to Edward “Jack” and Anna (Mann) Harder. He married Clara Ann Ervin on February 13, 1954, at the Crossroads Lutheran Church.
He was a 1947 Graduate of the Shoals High School, was employed by US Gypsum and NAD Crane, retiring in 1990 after 28 years as a supervisor and was a Veteran of the United States Army, serving during the Korean War. He was Past Commander of the Shoals American Legion, a member of the Shoals V.F.W. and the Shoals Eagles.
Survivors include his wife Clara Ann, one son, Doug Harder of Shoals; three daughters, Clara Lee Harder of Indianapolis, Cathy Harder of Michiana Shores, Kimberly Harder of Shoals; grandchildren, Eric and Chad Shaw, D.J. Harder and Waylon Thomas Harder; five great-grandchildren, Maggie, Gracie, Carson, Kenley, Kyra Ann Shaw; and one brother, Bill Harder of Tennessee.
He is preceded in death by his parents, daughter, Cheryl Lynn Stiles; three brothers, Howard, Karl and Edgar Harder; two sisters, Lillian Wininger and Christian Harder.
Funeral Services will be held at 2 p.m. Wednesday, January 23, 2019, at the Queen-Lee Chapel in Shoals. Visitation will be 11 a.m. until the time of service at the funeral home. Burial will be at a later date.
The arrangements are entrusted to the Queen-Lee Chapel of the Thorne-George Family Funeral Homes.
William Norman “Bill” Terrell – Mitchell 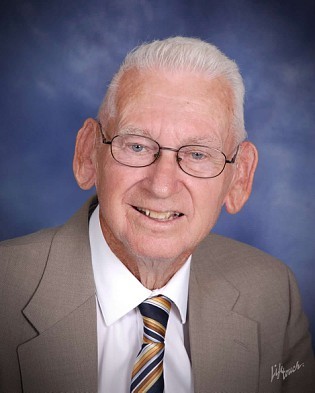 May 31, 1934 – January 19, 2019
William Norman “Bill” Terrell, 84, passed away Saturday, January 19, 2019, at Indiana University Health Bedford Hospital.
Born May 31, 1934, in Lawrence County, he was the son of Robert M. and Mattie (Hahn) Terrell. He married Joan R. Roberts June 5, 1953.
Bill was a general contractor and farmer. He graduated from Mitchell High School in 1952 and attended Indiana University. Bill was a member of the Mitchell Wesleyan Church. He loved gospel music and was a member of the IU Marching Hundred that played at President Eisenhower’s inauguration.
Survivors include his wife, Joan Terrell of Mitchell; son, Tom (Lorrie) Terrell of Mitchell; grandchildren, Chris (Stephenie) Clock, Joni Clock, Tara (Jared) Condon; great-grandchildren, Bryan Hamm, Gabriel Condon; son-in-law, Jim (Debbie) Clock of Mitchell; sister, Sue McIntyre of Columbus
His parents; daughter, Sherry Clock; and siblings, Laura Jane Smith, Doretta K. Scott, Nancy Jolley, Keith Terrell, and Robert Terrell, preceded him in death.
Funeral service will be at 11 a.m. Thursday, January 24, at the Mitchell Wesleyan Church with Reverend Stephen Jones officiating. Burial will be in Lawrenceport Cemetery. The family will receive friends from 4 p.m. until 7 p.m. on Wednesday at Chastain Funeral Home & Cremation Center and from 10 a.m. until the service on Thursday at the church.
Memorial Gifts can be made in Bill’s memory to the: Alzheimers Association.
Condolences may be sent to the family at www.chastainfuneralhome.com
Warren C. “Chuck” Kopp – Bedford
October 8, 1944 – January 19, 2019
Warren C. “Chuck” Kopp, 74, of Bedford, passed away unexpectedly at 3:45 a.m. Saturday, January 19, 2019, at St. Vincent Hospital in Bedford.
Born on October 8, 1944, in Bedford, IN, he was the son of Warren Kopp and Juanita (Hawkins) Kopp. He married Darlene K. Turner on January 15, 1966, and she survives. He was a member of St. Vincent de Paul Catholic Church. He retired from General Motors as a diecast maker. After his retirement, he went to work for Mullis Petroleum.
Surviving with his wife, Darlene of Bedford; one son: David W. Kopp; one daughter: Missy Shelton and husband Scott of
Bedford; six grandchildren: Jordan Fleetwood (Whitney), Logan Kopp, Kinnon Kopp (Tabi), Ryan Shelton (Stevie), Alyssa Shelton, and Katie Shelton (Cameron); four great-grandchildren: Deklin Kopp, Watson Shelton, Zoey Roach, and
Oliver Roach; one brother: Tim Todd and wife Dianne of Mooresville; his mother-in-law, Margie Smoot; a brother-in-
law Greg Turner and his wife Gay; and several nieces and nephews.
He was preceded in death by his parents, one sister: Carole Diane Allen, his father-in-law, Glen Turner.
A private funeral mass will be held, and burial will follow in the Green Hill Cemetery.
Family and friends may express condolences at www.daycarter.com.
Arrangements are under the direction of the Day & Carter Mortuary.
James Michael “Mike” Siddens – Mitchell
May 5, 1950 – January 19, 2019
James Michael “Mike” Siddens, 68, of Mitchell died at 10 a.m. on Saturday, January 19, 2019, at the I.U. Health Bloomington Hospice House.
Born May 5, 1950, in Danville, IL he was the son of James and Wanda (Montgomery) Siddens. He married Ruth White on June 8, 1974, and she survives. He retired as a General Supervisor from General Motors. Mike was a member of the Central Church of Christ in Bedford. He loved Street-Rods, R.C. airplanes and cars.
Survivors include: his wife of 44 years, Ruth of Mitchell, two daughters: Sarah Cummings and husband Stacey of
Bedford, and Amy Siddens Land and husband Aaron of Newburgh; three grandchildren: Wyatt Cummings, James
“Jay”, and Ann-Marie Land; two sisters: Fern Handley, and Diane Gilles both of Indianapolis; Mike Story of Danville, IL,
who was like a brother, and several nieces and nephews.
He was preceded in death by his parents.
A memorial service will be held at Noon, on Friday, January 25th at the Central Church of Christ with Rick Leach
officiating. Visitation will be from 10 a.m. until the hour of service on Friday at the church.
The family asks that friends consider memorial contributions be made to Pancreatic Cancer Action Network, www.pancan.org.
Family and friends may express condolences at www.daycarter.com.