According to a Greene County Sheriff’s Department news release, 52-year-old Paul Patton of Bedford drove through the 135-year-old Richland-Plummer Creek Bridge on South Baseline Road on Saturday afternoon damaging the bridge and then left the scene of the accident.
The 122-foot burr arch bridge was built in 1883 and rehabilitated in 1997. It has a clearance of 13 feet. The sheriff’s department says the bridge was damaged because the truck was too tall to cross. 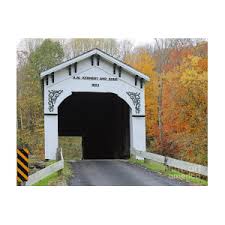 Deputies caught up with him while responding to an unrelated crash on State Road 54 East.
The sheriff’s department has recommended Patton face a misdemeanor charge of failure to stop after an accident. The report has been sent to the Greene County Prosecutor’s Office for review.