(INDIANAPOLIS) – A coalition of Indiana business, religious and community group leaders says it won’t be satisfied with what it describes as a weakened version of a proposed state hate crimes law.

Tom Davies, of the Associated Press, reported more than 100 supporters joined the group Indiana Forward on Tuesday at the Statehouse to launch a lobbying campaign for the law. Several speakers argued Indiana needs a strong law that specifically extends protections against crimes fueled by biases regarding traits such as race, religion and sexual orientation. Indiana is one of just five states without such a law. 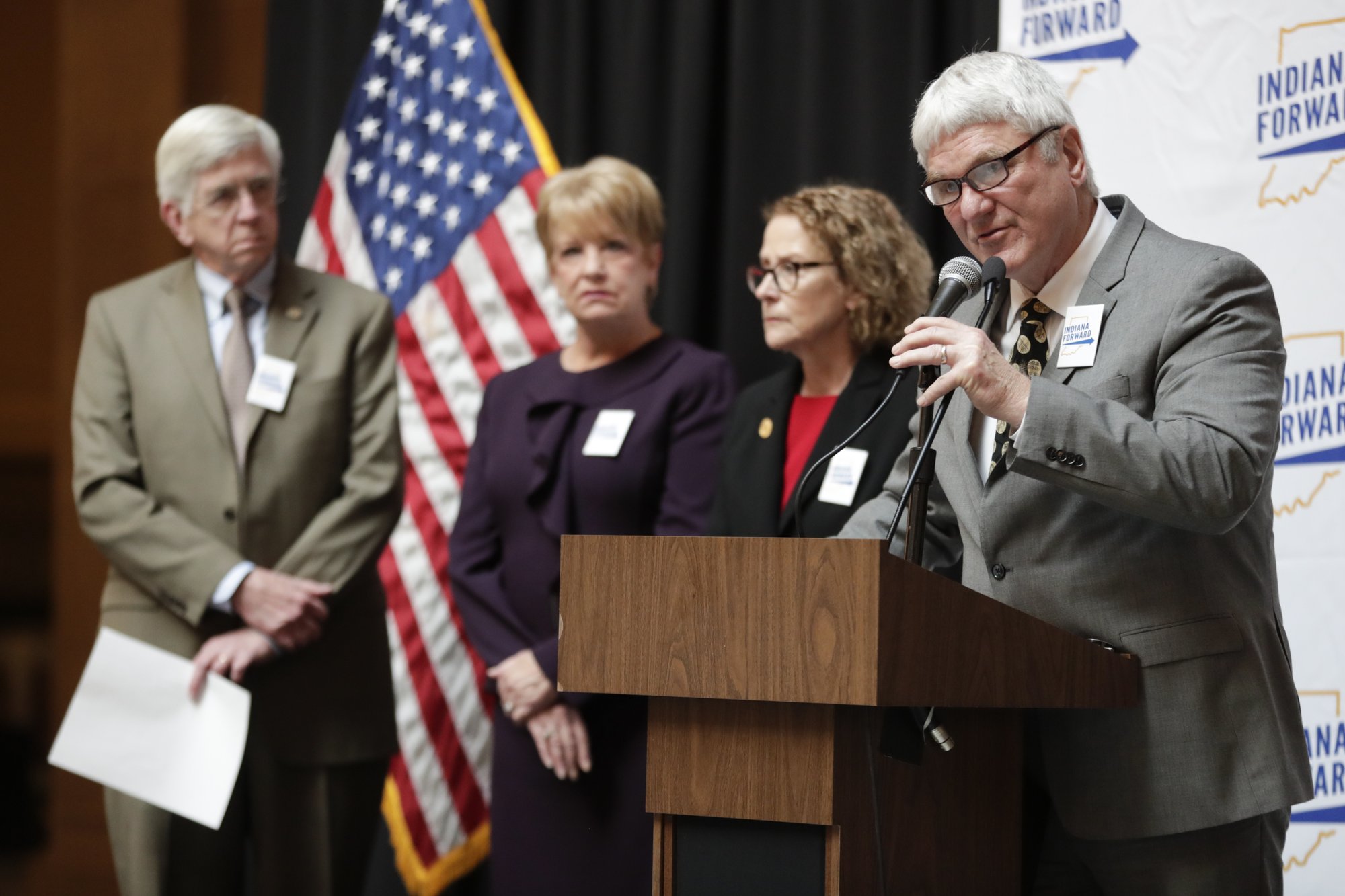 State Rep. Tony Cook, R-Cicero, is joined by state Reps. Ed DeLaney, D-Indianapolis, left, Cindy Ziemke, R-Batesville, center left, and Donna Schaibley, R-Carmel, center right, as they discuss hate crimes legislation at the Statehouse in Indianapolis, Tuesday, Jan. 8, 2019. Indiana remains one of just five states without a clear and specific hate crimes law. AP Photo/Michael Conroy
The debate comes in the wake of a controversy over a 2015 law that critics said allowed gay people to be discriminated against. The law was later changed, but only after a national backlash and threats of a boycott.
A proposal submitted by a top House Republican would allow judges to impose tougher sentencing for hate crimes, but not list any protected traits.
The leader of an Indianapolis business group said state law needs to send a clear message that Indiana respects diversity so the state can continue to attract talented workers.
“It needs to provide clarity, it needs to not leave anybody out and it’s got to provide specificity,” said Michael Huber, the president and CEO of Indy Chamber.
Republican Gov. Eric Holcomb supports adopting a hate crimes law, saying it is “the right thing to do” while emphasizing the state’s status was hurting business recruitment efforts.
Repeated efforts for an Indiana law have failed amid fierce opposition from conservatives who maintain it would unfairly create specially protected classes of victims and wrongly restrict free speech. Hate crime laws in other states vary to some degree but generally allow for stiffer sentences to be given to people who are convicted of crimes motivated by hatred or bias. Only Indiana, Georgia, South Carolina, Wyoming, and Arkansas do not have such laws.
Several hate crime bills have been filed in the opening days of the Indiana legislative session, with most including specific lists of protected traits.
A bill sponsored by Republican Rep. Tony Cook of Cicero covers crimes motivated by the victim’s age, race, religion, ethnicity, color, disability, gender, gender identity, national origin, sexual orientation, ancestry and status of being a law enforcement officer or military member.
But one filed by Republican House Majority Caucus Chairman Greg Steuerwald of Danville includes no such list while allowing a judge to consider the accused person’s bias because of the victim’s “real or perceived characteristic, trait, belief, practice, association, or other attributes the court chooses to consider.”
Steuerwald said his aim was to have a law that doesn’t exclude anyone. He said his research found nearly three dozen protected groups included among hate crime laws in other states.
“Where do you stop? With my bill, you never come back next year to add somebody. It’s comprehensive and we’re done with it,” Steuerwald said.
Cook said he’s motivated to support a strong law from his experiences in the 1980s while principal of Hamilton Heights High School when young AIDS patient Ryan White enrolled there after an uproar over his attendance at a school in neighboring Howard County.
“I think there’s overwhelming support out there to do it right — not water it down, not do a half-good, feel-good measure,” Cook said.
The spray-painting of a swastika outside a suburban Indianapolis synagogue over the summer was an incident that several hate crime law advocates talked about Tuesday when discussing the issue.
“This was meant to intimidate the members of the congregation and the Jewish community as a whole,” Republican Rep. Donna Schaibley of Carmel said.