(INDIANAPOLIS) – The Indiana Builders Association (IBA) recently awarded the 2018 John C. Hart Presidential Award to Tom Slater of Brazil, Indiana. Slater is the Director of Business Development at Timberland Lumber Company and has served in the housing industry for nearly twenty years. 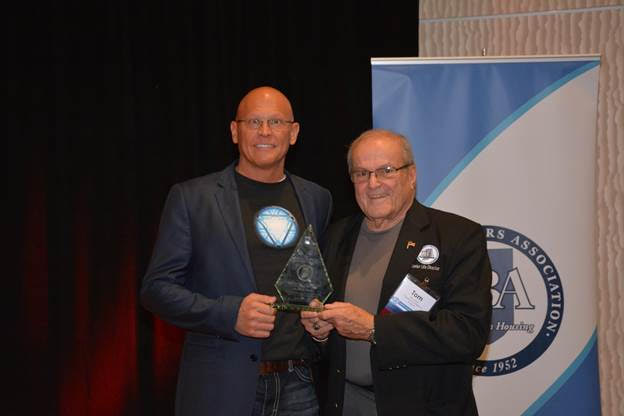 Tom Slater (right) accepting his award at the IBA Board of Directors Meeting on Dec. 4, 2018 from IBA President Pat Richard
The award is named in honor of John C. Hart, Sr. who served as Chairman of the Indiana House Ways and Means Committee in the early 1970s. Hart was known for being instrumental in restructuring Indiana’s property tax system with then Governor Doc Bowen. Hart is also the only Hoosier to serve as President of the National Association of Home Builders and one of five Hoosiers inducted into the National Housing Hall of Fame.
“The John C. Hart Presidential Award is given to a select few who have made extraordinary contributions to the housing industry, the association, and their community,” said 2018 IBA President Pat Richard. “I am honored to present Tom with this award recognizing his unwavering commitment and dedication to the builders association.”
Tom was also appointed by Governor Mike Pence to serve on the Indiana Land Resources Council. Last year, he was recognized by his local home builders association as he was inducted into the Housing Hall of Fame, only the second associate to receive this honor.
“It is such an incredible honor to be recognized for this award that some of housing’s greatest heroes have accepted before me,” Tom said. “It is through membership with this organization that I realized my greatest accomplishment was surrounding myself with these incredible leaders that have changed my life forever.”
About the Indiana Builders Association
The Indiana Builders Association (IBA) is a statewide trade organization representing Indiana’s home building, remodeling, and light commercial construction industry. Established in 1952, IBA has 25 local affiliates organized into eight geographic areas across Indiana. IBA, along with its affiliates, is associated with the National Association of Home Builders in Washington, D.C. The organization works to educate its members, the general public, elected officials and regulatory bodies to maintain and develop workable and affordable regulations and laws that enable the citizens of Indiana to own a home. More information can be found at www.buildindiana.org.