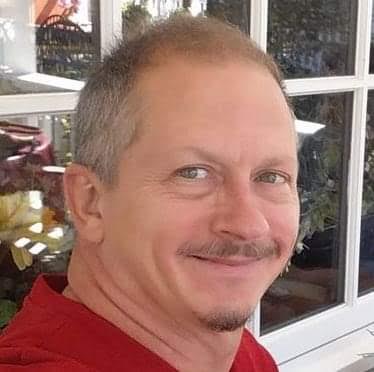 March 5, 1961 – October 29, 2018
Homer E. Boshears, 57, of Bedford, passed away on Monday, October 29, 2018, in Bloomington, Indiana.
Born March 5, 1961 in Bloomington, Indiana, he was the son of Homer Boshears and Norma (Williams) Paxton. He married Donnett Flynn on August 7, 1981; and she survives. He was employed by Elon Properties, Bloomington, Indiana and was a graduate of Bedford North Lawrence High School, Class of 1979. He attended college at UEI, Louisville, Kentucky.
Survivors include his wife, Donnett Boshears of Bedford; his siblings: Teresa Boshears, David Dyer, John Boshears, Amber Serabian; mother- and father-in-law, Donald and Betty Flynn; and several nieces and nephews.
He was preceded in death by his parents; daughter, Brittany Boshears; and his sibling, Larry Dyer.
Funeral service will be on Friday, November 2, 2018, at 11 a.m. at Ferguson-Lee Chapel of Thorne-George Family Funeral Homes, Inc. in Bedford, with Pastor Russell Hylton officiating. Burial will be in Hilltop Cemetery. Visitation will be on Thursday from 2 p.m. until 8 p.m. at the funeral home.
Memorial contributions may be made to the Brittany Nicole Boshears Scholarship Fund at Hoosier Hills Credit Union or thru the funeral home.
Online condolences may be sent to the family at Thorne-George Family Funeral Homes
Kenneth Kern
January 14, 1937 – October 26, 2018
Kenneth Kern, 81, of Bedford, died Friday, October 26, 2018, at his residence.
Born January 14, 1937, he was the son of Charles and Mary Birdie (Taylor) Kern. He married Mary Louise Combest and she preceded him in death. He had been employed at Stone City Construction, Work One, and had served in the National Guard. He attended the Bride of Christ Church, the Oolitic Pentecostal Church, and the Harrodsburg Assembly of God.
Survivors include two sisters, Wilma J. Sickman and husband, John, of Stendill, IN and Etta Rose Bealier, of Alameda, CA; two step-daughters, Becky and Sherry. He was preceded in death by his parents, his wife, a brother, Paul E. Kern; four sisters, Eula Gardner, Ruby Burns, Naomi Stone and Emma Ira.
Funeral services will be conducted at 2 p.m. on Friday, November 2, 2018 in the Elmwood Chapel of the Day & Carter Mortuary with Pastor Danny Goens officiating. Burial will follow in the Old Union Cemetery. Visitation will be from Noon until the hour of service on Friday, at the Day & Carter Mortuary.
Family and friends may express condolences at www.daycarter.com.