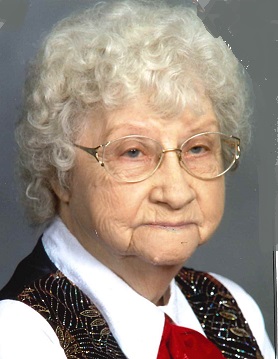 September 11, 1920 – November 1, 2017
Elizabeth E. Allen, 97, of Bedford, died at 8:50 a.m. on Wednesday, November 01, 2017 at Westview Nursing and Rehabilitation.
Born September 11, 1920, she was the daughter of Tonstle Quals and Zelma (Daniel) Phelps. She married William C. Allen on January 15, 1937 and he preceded her in death on June 6, 2007. She was a homemaker and member of the Grace Full Gospel Church.
Survivors include two sons, William P. Allen, of Washington, DC and John L. Allen and wife, Carol D., of Bedford; a daughter, Monia Rosselle, of Bedford; a grandson, Brett Rosselle; a granddaughter, Melissa Allen Hawkins and husband, Justin, and a great granddaughter, Marissa.
She was preceded in death by her parents, her husband, two brothers, one half-brother and a half-sister.
Funeral services will be conducted at 2 p.m. on Friday, November 3rd in the Elmwood Chapel of the Day & Carter
Mortuary with Pastor Brent O’Neal officiating. Burial will follow in Cresthaven Memory Gardens. Visitation will be
from 10 a.m. to service on Friday at the Day & Carter Mortuary.
Memorial contributions may be made to White River Humane Society.
Family and friends may express condolences at www.daycarter.com.