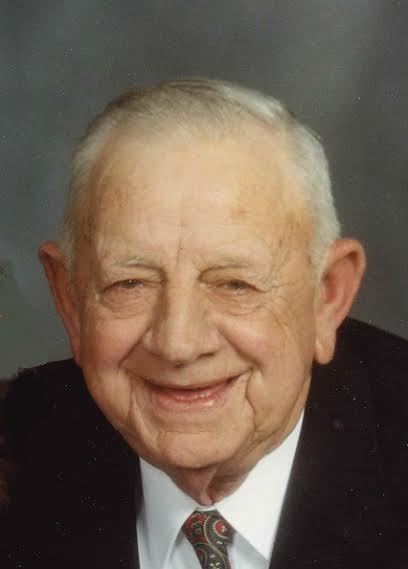 December 16, 1923 – April 27, 2017
Ray Simmons, Jr., 93, of Bedford, died at 10:17 am on Thursday, April 27, 2017, at I.U. Health Bloomington Hospital.
Born December 16, 1923 , in Bedford, he was the son of Raymond Samuel and Rose (Wagner) Simmons. He married Clella Margaret “Peggy” Stevens on February 25, 1946 and she preceded him in death on February 2, 2016. He was a graduate of Bedford High School and worked for Coca-Cola Bottling before joining the military. He was a veteran serving as a staff sergeant with the U.S. Army Corps of Engineers during WW II, stationed in the pacific. He partnered with his brother at Forty’s Fish for several years. Later, he worked at Johnson’s Dairy and eventually moved to Holland Dairy where he retired as a delivery driver in 1984. He was raised in the Free Methodist Church in Bedford. He was an associate member of F.O.P. Stone City Lodge #94 for forty-one years. A member of the Gillen Post #33 American Legion for fifty years where he was an avid bowler for the legion team. He loved baseball and was an original member of Bedford AC’s and then coached Little League for many years. He belonged to the Bedford Horseshoe League and was active with Santa’s Helpers. Ray had a great love for his family and their get-togethers.
Survivors include three children, Steve Simmons and wife, Vicky, of Bedford, Pat Crane, and husband, Lowell, of Mitchell and Mark Simmons, and wife, Raeanna, of Columbus; six grandchildren; fourteen great grandchildren; a brother, Viv Simmons, of Fowler, IN; several nieces and nephews.
He was preceded in death by his parents, wife, three brothers, Lowell, Forty and Doyle Simmons; one sister, Mary Ruth Lewis.
Funeral services will be conducted at 11:00 am on Monday, May 1st in the Elmwood Chapel of the Day & Carter Mortuary with Rev. Dave Colgan officiating. Burial will follow in Cresthaven Memory Gardens where military rites will be accorded by members of Gillen Post #33 American Legion. Visitation will be from 5 p.m. to 8 p.m. on Sunday, April 30yh at the Day & Carter
Mortuary. Family and friends may express condolences at www.daycarter.com.
Ray Simmons Jr. – Bedford
Ray Simmons, Jr., 93, of Bedford, died Thursday, April 27th at I.U. Health Bloomington Hospital.
Arrangements are pending at the Day & Carter Mortuary.