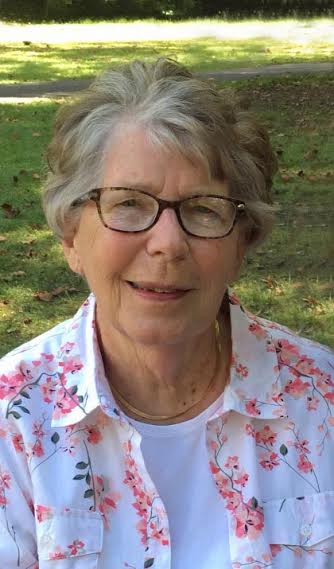 April 3, 1935 – April 17, 2017
Patricia Joan Miracle, 82, formerly of Mitchell, passed away Monday, April 17, 2017, at her residence.
Born April 3, 1935, in Chillicothe, Missouri, she was the daughter of Russell and Mildred Agnes (Wright) Alexander. She married C. R. Miracle December 29, 1957, and he preceded her in death August 26, 2014. Pat was a homemaker and a devoted wife and mother. She enjoyed gardening, canning, embroidering, and was an excellent seamstress. She was a 1953 graduate of Mitchell High School and a 1957 graduate of Indiana University where she was a member of Delta Delta Delta Sorority. Pat was a member of the First Baptist Church.
Survivors include her children, Alexander R. (Tracy) Miracle of Bloomington, Cynthia Dawn (Steven) Sipe of Lebanon, Steven Ray (Brandy) Miracle of Springville; grandchildren, Adam (Kelsey) Miracle, Cassie (Logan) Wegleitner, Mimi (Tyler) Deckard, Preston (Valerie) Sipe, Landon (Hannah) Sipe, Taylor (Jake) Bernard, C. J. Bradley, Erin Bradley, and Emma Miracle; three great grandchildren; brother, Robert (Peggy) Alexander of Florida
Her parents and husband preceded her in death.
Memorial Service will be at 2 p.m. Sunday, April 23, at the First Baptist Church
with Reverend Reggie Clark officiating. The family will receive friends at a reception in the Christian Life Center following the service.
Condolences may be sent to the family at www.chastainfuneralhome.com
Everett “Junior” Atkison Jr. – Shoals
March 25, 1925 – April 18, 2017
Everett “Junior” Atkison Jr., 92, of Shoals, passed away at 11:27 a.m. on Tuesday, April, 18, 2017 at the Deaconess Hospital in Evansville.
He was born on March 25, 1925 to Everett and Gertrude (Lynch) Atkison. He married Delorma Wade on October 12, 1949 at the Shoals Church of Christ and she survives. They celebrated 67 years of marriage.
He was a retired supervisor at US Gypsum in Shoals and a WWII Army veteran. He attended the Washington Church of Christ and the West Shoals Church of Christ.
He is survived by his wife, three sons, Greg (Brenda) Atkison, of Henderson, KY, Roger Atkison of Franklin and Warren Atkison, of Shoals; one sister Bonnie Elms of Orman Beech, FL.; five grandchildren, Adam and wife Kristi, Andy and wife Karen, John and wife Tiffany, Ryan and Taylor.
He was preceded in death by his parents, two sisters and one brother.
Funeral services will be at Noon on Saturday at the Queen-Lee Funeral Chapel in Shoals. Burial will be in the Springhill Cemetery. Visitation will be from 4 p.m. till 8 p.m. on Friday and from 9 a.m. until service time on Saturday.
Queen-Lee Chapel in Shoals is in charge of arrangements.
Nancy Theresa Schroeder – Bedford
July 27, 1920 – April 15, 2017
Nancy Theresa Schroeder, 96, of Bedford , died at 2:20 a.m., Saturday, April 15, 2017, at Stonebridge Health Campus, Bedford.
Born July 27, 1920, in Altamonte, Calabria, Italy, she was the daughter of Frank and Theresa Paledino.
She married Fred A. Schroder on March 27, 1943 and he died November 25, 1995.
She and her husband operated the Dog & Suds Drive-In, Bedford, in the late 1950’s and early 1960’s. She also worked at NAD Crane, IN and Bedford Middle School. She was a member of St. Vincent de Paul Catholic Church. Nancy was a very caring person who loved everyone. She was a very good cook.
Surviving are one brother, Jim Paledino, Dalton, IL and two sisters, Mary Hall, Arlington, TX and Rose Crane, Bloomington, IN; and several nieces and nephews and great nieces and nephews.
She was preceded in death by her parents, her husband Fred, her daughter Karen , her son Jim who was her pride and joy, and three brothers, Joe, Frank and John Paledino.
The Mass of Christian Burial will be at 2 p.m. Friday, April 21, 2017 at St. Vincent de Paul Church, Bedford with Fr. Rick Eldred and Dcn. Dave Reising officiating. Burial will be in Green Hill Cemetery. Friends may call from 11 a.m. to 2 p.m. Friday at the Ferguson-Lee Chapel of Thorne George Family Funeral Homes, Bedford.
Online condolences may be sent to the family at www.fergusonlee.com.
Thomas J. Hopper – Bedford
June 28, 1945 – April 13, 2017
Thomas J. Hopper, 71, of Bedford, passed away on Thursday, April 13, 2017, at his residence.
Born June 28, 1945, in Bedford, he was the son of John and Louise (Pelfree) Hopper.
He was a graduate of Bedford High School, Class of 1965. He was a former member of the Bedford Masonic Lodge, and a member of the Eagles.
Thomas was retired from the United States Air Force.
Surviving are two sons, Adam Hopper, of Bedford, and Matthew Hopper, of Severn, MD; grandchildren, Dezarae (Rick) Carpenter, T.J. Hopper II, Mason Hopper, Delaney Hopper, Adrienne Hopper, and Owen Hopper; several nieces and nephews; one brother, Robert (Laura) Hopper; one sister, Dora Sears; and sister-in-law, Liz Hopper.
He was preceded in death by his parents; one brother, John Hopper; and one sister, Mary Reynolds.
Memorial visitation will be on Thursday, April 20, 2017 from 2 p.m. till 4 p.m. at the Ferguson-Lee Chapel of Thorne-George Family Funeral Homes.
Online condolences may be sent to the family at www.fergusonlee.com.