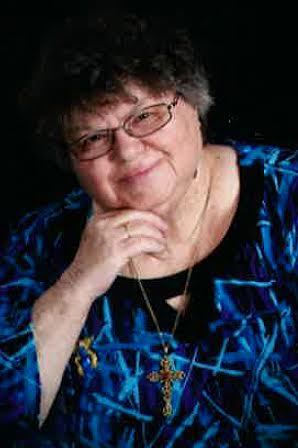 January 9, 1949 – May 22,2016
Sharon Kay Bowden, 68, passed away Sunday afternoon, May 22, 2016, at Indiana University Hospital in Indianapolis.
Born January 9, 1948, in Lawrence County, she was the daughter of James T. and Norma Jean (Underwood) Asbury. She married Jerry A. Bowden December 4, 1965, and he preceded her in death April 12, 2013. Sharon was a homemaker. She was a member of the Mitchell Church of the Nazarene and had served as Prime Time Leader, board member, and Sunday school teacher.
Survivors include her son, Kevin Scott Bowden of Mitchell; sister, Carolyn (Tim) Moffitt of Bedford; grandchildren, Carrie Tolbert, Justin Bowden, and Timmy Bowden; 5 great grandchildren
Her father; mother, Norma Jean Ellis; husband; son, Jerry Craig Bowden; brother, David Richard Ellis; and granddaughter, Jennifer Bowden, preceded her in death.
Funeral service will be at 1 p.m. Thursday, May 26, at the Mitchell Church of the Nazarene with Pastor Joel Parsons, Pastor Karolyn Parsons, and Pastor Matt Moore officiating. Burial will be in Mitchell Cemetery. Friends may call from 11 a.m. until the service on Thursday at the church.
Condolences may be sent to the family at www.chastainfuneralhome.com
Alice Carolynn Maegerlein Williams – Bedford
April 9, 1927 – May 22, 2016
Alice Carolynn Maegerlein Williams, 89, of Bedford, died Sunday, May 22, 2016, at her residence.
Born April 9, 1927, in Williams, she was the daughter of Troy O. and Leone (Williams) Maegerlein. She married Robert D. Williams on June 18, 1950,
and he preceded her in death on January 3, 1996. She was a graduate of Williams/Huron High School and the Methodist Hospital of Nursing. She was a registered nurse retiring from Dunn Memorial Hospital after forty-seven years of service. She was a member of the Central Church of Christ.
Survivors include two daughters, Charlotte Ann Roberts and husband, Stan, of Nashville, TN; Dr. Deborah Jane Craton and husband, John Douglas, of Bedford; five grandchildren, Tracy Roberts-Beasley and husband, Chris, and David Troy Roberts both of Nashville, TN; Benjamin A. Craton and wife, Nyssa, of Lafayette; Jonathan Craton and wife, Annie, of Kirkland, WA; and Stephen Craton, of Richmond, VA; two great grandchildren, Sam and Isaac Beasley, both of Nashville, TN; two cousins, John A. Williams, of Bedford; and Stephen Maegerlein, of Williams
She was preceded in death by her parents, her husband, two sisters, Charlotte Juanita Maegerlein and Dorothy Jane Young.
Funeral services will be conducted at 1 p.m. on Wednesday, May 25th in the Elmwood Chapel of the Day & Carter Mortuary with Bro. Bud Smith and Bro. Gary Spear officiating. Burial will follow in Williams Cemetery. Visitation will be from 11 a.m. until the hour of service on Wednesday, May 25th at the Day & Carter Mortuary. The family asks that friends consider memorial contributions be made to Spring Mill Bible Camp; Child’s Place, 2420 E. 10 th Street, Jeffersonville, IN, 47130-9955 or St. Vincent Dunn Hospital Foundation.
Family and friends may express condolences at www.daycarter.com.
Iris Jean Cobb – Bloomington
September 27, 1931 – May 21, 2016
Iris Jean Cobb, 84, of Bloomington, formerly of Bedford, died at 12:17 pm on Saturday, May 21, 2016 at Monroe Hospital surrounded by her family.
Born September 27, 1931 in Oolitic, she was the daughter of Banford and Matha (Sexton) Staley. She married Edward Cobb on December 24, 1948 and he preceded her in death on May 1, 1997. She was a homemaker and a member of the Crossroads Community Church.
Jean was a faithful Christian and loved her church. Her family and her dog, Lacy, were the most dear to her and she will be truly missed by them.
Survivors include three grandchildren; Dana Williams and husband Michael of Dugger, IN, Daniel Cobb and wife Thao of Bentonville, Arkansas, and Tommy Le and wife Diem of Texas; five great grandchildren, Conner Williams, Kaylee Williams, Jeremy Cobb, Johnny Le and Judy Le; siblings; Mary Fiscus and husband Ron of Crescent City, IL, Kay Wagner and husband Marvin of Solsberry, IN, Kermit Floyd and wife Brenda of Shoals, IN, Masina Sargent and husband Mike of Salem, IN, and Diana Hamilton and husband Bob of Linton, IN.
She was preceded in death by her parents; husband; one daughter, Kathie Rose; one son, Edward W. Cobb; and one brother, Charles Staley.
Funeral services will be conducted at 11 a.m. on Wednesday, May 25, 2016 at the Crossroads Community Church with Pastor Ken Ransom officiating. Burial will follow at the Hilltop Cemetery. Visitation will be from 4 p.m. till 8 p.m. on Tuesday, May 24, 2016 at the Crossroads Community Church and from 10 a.m. until the hour of service on Wednesday at the Crossroads Community Church.
The family asks that memorial contributions may be made to the Crossroads Community Church Food Pantry.
Family and friends may express condolences at www.daycarter.com.
Ernest Manning- Bedford
Ernest Manning, 72, of Bedford, died Monday, at I.U. Health Bedford Hospital.
Arrangements are pending at the Day & Carter Mortuary.
A. Carolynn Williams – Bedford
A. Carolynn Williams, of Bedford, died Sunday at her residence.
Arrangements are pending at the Day & Carter Mortuary.
Sharon Kay Bowden – Mitchell
Sharon Kay Bowden, 68, of Mitchell, passed away Sunday afternoon at IU Health University Hospital in Indianapolis.
Funeral arrangements are pending at Chastain Funeral Home & Cremation Center.