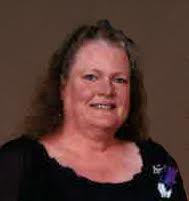 May 26 1959 – January 24, 2016
Rhonda Joyce Atkinson, 56, of Mitchell, passed away Sunday, January 24, 2016,
at Indiana University Health Methodist Hospital in Indianapolis.
Born May 26, 1959, in Jasper, she was the daughter of Leroy and Eunice Leona (Huntman) Hupp. She married Patrick Lee Atkinson November 12, 2006. She was employed at the Jay-C Deli. Rhonda graduated from Mitchell High School in 1977 and was a Girl Scout leader for 22 years. She did the 60 mile Susan G. Komen Three Day Walk. Rhonda was a member and choir director of the Mitchell Presbyterian Church, served on the worship committee, and was a former elder and deacon.
Survivors include her husband, Patrick Lee Atkinson of Mitchell; daughters, Erin (David) Brummett of Mitchell; Ashley (Joao) Stinson of Alexandria; parents, Lee and Eunice Hupp of Mitchell; grandchildren, Abby, Evan, Maddie, and Logan; brothers, Marvin (Janelle) Hupp of Wisconsin; Mark (Lisa) Hupp of Tifton, Georgia; sister, Dee Hupp-Sanders of Bloomington
Funeral service will be at 10:30 a.m. Saturday, January 30, in the Mitchell Presbyterian Church with Reverend Daniel Watson officiating. Burial will be in Mitchell Cemetery.
Friends may call from 4 p.m. till 7 p.m. Friday at Chastain Funeral Home & Cremation
Center and from 9:30 a.m. until the service on Saturday at the church.
Condolences may be sent to the family at www.chastainfuneralhome.com
Julie Ann Elliott – Bedford
September 26, 1955 – January 25, 2016
Julie Ann Elliott, 60, of Bedford, died at 1:32 p.m. Monday, January 25, 2016, at IU Health Hospital, Bedford.
Born September 26, 1955, In Bedford, she was the daughter of James Marion Elliott and Phyllis June (Smith) Elliott.
She was a lifelong member of the Nazarene Church, Bedford; she attended and worked at LARC, Bedford; she loved I.U. Basketball and Bobby Knight; and she loved her uncles Dave and Joe Elliott and the fact that they continued the Christmas parties at LARC started by her father. She had a big heart and was generous to a fault.
Surviving are two brothers, Tim Elliott, Greenwood, IN and James M. Elliott, Bedford; one sister-in-law, Tracey Capps, Bedford; two nieces, Taylor Elliott, Greenwood and Meredith Elliott, Indianapolis; three great nieces, Piper Carroll, Greenwood, and Kylie and Lindsey Capps, Bedford.
She was preceded in death by her parents; and one brother, Stephen Elliott.
Funeral service will be at 11 a.m. Saturday, January 30, 2016, at Ferguson-Lee Funeral Home, Bedford. Burial will be in Beech Grove Cemetery. Visitation will be Friday from 4 p.m. till 8 p.m. at the funeral home.
Memorial contributions may be made to LARC Stone Belt of Lawrence County.
Online condolences may be sent to the family at www.fergusonlee.com.