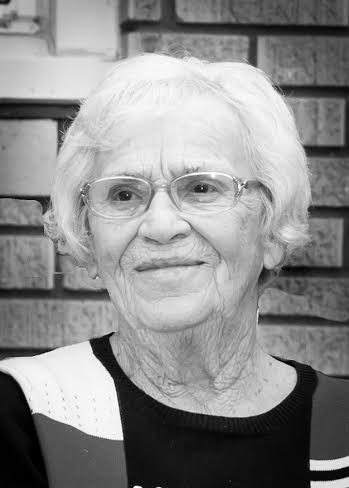 November 10, 1928 – August 25, 2015
Anna M. Mills, 86, of Oolitic, died at 9:50 am on Tuesday, August 25, 2015 at her residence.
Born November 10, 1928 in Oolitic, she was the daughter of Cecil and Clysta A. (Brown) Mitchell. She graduated from the Oolitic High School with the class of 1947. She married Willie “Tip” Mills on November 17, 1947 and he preceded her in death on May 14, 2010. She retired from NWSC Crane in 1990 as a production line worker. She was a member of the Oolitic Baptist Church and the Order of the Eastern Star #547 in Solsberry.
Survivors include two daughters, Mary Lou New and husband, Barry, of Greenwood, IN, Jenny Day and husband, Kevin, of Bedford; two grandsons, Brandon New and wife, Cybil, of Greenwood, IN, Derek Day and fiancé, Lacey Woolf, of Knoxville, TN; a great grandson, Isaac K. New of Greenwood, IN; a sister-in-law, Lorraine Mitchell of Oolitic; a brother-in-law, Charles Pritchett of Bedford.
She was preceded in death by her parents, her husband, a grandson, Robert Dax New; two sisters, Betty Johnson and Lucille Pritchett; a brother, Robert Mitchell.
Funeral services will be conducted at 1 pm on Thursday, August 27th with Rev. Richard Tallman officiating. Burial will follow in Cresthaven Memory Gardens. Visitation will be from 11 am until the hour of service on Thursday, August 27th at the Day & Carter Mortuary.
Family and friends may express condolences at www.daycarter.com.
Rayette Lynn Holt – Orleans
June 30, 1954 – August 24, 2015
Rayette Lynn Holt, 61, of Orleans, passed away at 8:56 p.m. Monday, August 24, 2015, at Floyd Memorial Hospital in New Albany.
Born June 30, 1954, in Bedford, she was the daughter of Raymond and Mable E. (Acton) Gassaway. She married Wayne Holt December 27, 1971. Rayette had managed the Orange County Humane Society, and was a homemaker.
Survivors include her husband, Wayne Lee Holt, Orleans; children, Wayne Lee (Ashley) Holt II, Orleans; John Henry (Kayla) Holt, Orleans; Carolyn Jo Holt, Bloomington; grandsons, Levi, Cameron, and Gage Holt; siblings, Charles Easto, Bowling Green, Kentucky
Her parents, and siblings, Emmett H. Dalton III, Marcella Pickett, Michael Gassaway, and Carolyn Streewell, preceded her in death.
Funeral service will be at 1:30 p.m. Saturday, August 29, at Mt. Horeb Baptist Church with Reverend Mike Williams officiating. Burial will be in Mt. Horeb Cemetery. Friends may call from 11 a.m. until the service Saturday at the church.
Condolences may be sent to the family at www.chastainfuneralhome.com
Wilbur Max Terrell – Mitchell
February 15, 1929 – August 21, 2015
Wilbur Max Terrell, 86, of Mitchell, passed away at 10:40 p.m. Friday, August 21, 2015, at Westview Nursing & Rehabilitation in Bedford.
Born February 15, 1929, in Huron, he was the son of David D. and Margaret (VanHoy) Terrell. He was married to Georgia Wilkerson. He was a truck driver for Mitchell Crushed Stone.
Survivors include his wife, Georgia Terrell, Mitchell; daughter, Kelly Trowbridge, Highland, Illinois; grandchildren, Jessa Blackwell, Shana Staggs, and Brandon Staggs
His parents and brother; James Roger Terrell, preceded him in death.
Graveside service will be at 11 a.m. Wednesday, August 26, at Huron Cemetery with Brother Allen Burris officiating.
Condolences may be sent to the family at www.chastainfuneralhome.com
James Dean Bergman – Shoals
February 24, 1964 – August 22, 2015
James Dean Bergman, 51, of Shoals, passed away at his home on Saturday, August 22, 2015 at 6:20 p.m.
Born in Orange County, Indiana on February 24, 1964, he was the sone of Roy K an Karen (Newlin) Bergman. Jim attended Shoals Schools and was disabled.
He is survived by his mother Karen Bergman, of Hillham; sister Lori West, of French Lick; brother Roy Lee Bergman, of Shoals; special nephew Josh Bergman, of Shoals and a very close friend Eldon Pursley, of French Lick.
He is preceded in death by his father and an infant brother Jeffrey Joe Bergman.
The family will receive friends from 10 a.m. until Noon on Saturday, August 29, 2015 at the Queen-Lee Funeral Home in Shoals. Burial will be at a later date in Milltown Cemetery in Milltown Indiana.
Condolences may be made to the family at www.queenlee.com
Sarah Ann Bundy – Bedford
Sarah Ann Bundy, 81, of Bedford, passed away on Tuesday, August 25, 2015, at IU Health Hospice House, Bloomington.
Born on November 3, 1933, in Heltonville, Indiana, she was the daughter of Jason Chambers and Pink (Hawkins-Sowders) Chambers.
She married Webster Bundy on May 3, 1969; and he survives.
She was a graduate of Heltonville High School. She was a member of St. John’s Episcopal Church. Sarah was a homemaker.
Surviving are her husband, Webster; two daughters, Karen (Brian) Wade and Kelly Bundy, both of Bedford; two grandchildren, Karly Wade, of Bend, OR, and Kyle Wade, of Boulder, CO; two sisters, Marjorie Bartlett, of Bedford, and Louise Bailey, of Heltonville; and several nieces and nephews.
She was preceded in death by her parents; four brothers, Ray Chambers, Herman Chambers, Leonard Chambers, and Billy Chambers in infancy; and two sisters, Betty Malott and Helen Smith.
A private graveside service will be held in Gilgal Cemetery
Arrangements are under the direction of Ferguson-Lee Funeral Home.
Online condolences may be sent to the family at www.fergusonlee.com.