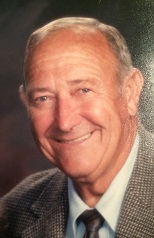 December 15, 1926 – November 8, 2014
Jiggs was born to Hilda ‘Hic’ Tolliver and Ira Sherrill, raised by his grandparents, Mary ‘Lavisa’ Terrell Tolliver & Grant Tolliver. He was proud to have been raised in Bedford’s north end.
Jiggs served in the US Army during WWII as a Military Policeman in North Africa, Iraq, Iran, Lebanon and Europe. He was recalled for the Korean War as an hand-to-hand combat instructor at Camp Atterbury.
He married the love of his life, Marjorie Phipps on April 19, 1947. She preceded him in death, March 5, 2005.They lived and raised their 4 kids on a farm in the Logan community of Lawrence County. They raised black angus cattle, quarter horses (having, at times, over 100 head) and percherons. For several years the family would annually donate a mare and new colt to the Lincoln Park Zoo in Chicago.
Jiggs was a member of Hillcrest Christian Church, International Brotherhood of Electrical Workers, Heltonville Area Veterans, American Legion Post #33 Bedford, Mitchell Senior Citizens and, if there was such a thing, he would have been a charter member of the Eat-Daily at the Golden Corral Club.
Jiggs never met a stranger and with his magnetic smile, made friends wherever he went. His favorite saying was, ‘Keep smiling.’
Jiggs had recently received his 60-year certificate from International Brotherhood of Electrical Workers. He was proud to be a union member and had worked on the construction of numerous power plants, schools and universities throughout the United States.
Jiggs could never understand people who accepted an ‘it-can’t be done’ response. He always dove headfirst into any project that needed to be done. He loved kids and coached basketball several years at the Bedford Boys Club. In the early 1960’s he was instrumental in starting the Biddy Ball program at Needmore School and was involved in school functions for many years. He was always the perfect Daddy and enjoyed being considered a stand-in dad or grandpa to every child he met. In recent years, he was presented with the Mister Hilltopper award by the Needmore Alumni Association.
He is survived by his children, Becky (Phil) Bailey, Curt (Sandi) Sherrill, of Bedford; Cathy (Dennis) Coyle of Bradenton, Florida, and daughter-in-law, Carla Sherrill of Texas. His grandchildren: Tristan (Michelle) Sherrill of Plano, Texas, Shay Sherrill of Bedford, Shannon (Laura) Sherrill or Staunton, Virginia, and Lisa (Mark Goza) Sherrill-Goza of Plano, Texas; Cody Bailey of Oolitic; Stephanie (Darin) Smithson and John (Erin) Sherrill of Bedford; Scott (Jen) Coyle of Bedford and Leslie (Jon) Mefford of Oolitic. Great-Grandchildren: Lauren and Madi Sherrill, Dylan & Brooks Sherrill; Finn Sherrill; Madisyn, Trinidy & Adalynn Bailey; Joe Smithson; Kyler, Reece, Gavin and Miley Sherrill; Jordan (Darren) McCloud; Alex, Gabe, Jordan & Jayden Coyle; Laney & Skyler Shoemaker; Caitlin &Allison Mefford. Also, like family, his very close friend and farm helper, Steve Blake.
He was also preceded in death by his oldest son, John Richard ‘Rick’; sister, Christina Holt, grandson Treat Charles Sherrill in infancy, and parents.
The family requests that, in lieu of flowers, donations be made to Hillcrest Christian Church or the American Legion Post #33 of Bedford (Veteran Transport Fund) or the L.I.F.E. Pantry.
Visitation will be from 2 until 8, Tuesday, November 11th at Hillcrest Christian Church. The funeral service will be held at 11:00 on Wednesday, also at the church, with visitation one hour before the service. Burial will take place at Mt Pleasant Christian Church Cemetery. Cresthaven Funeral Home is in charge of the services.