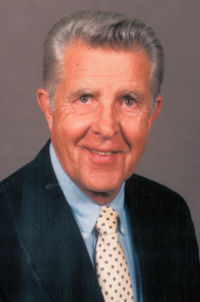 Donald “Bud” Keane, 87, Bedford, passed away Tuesday at Indiana University Health Bedford Hospital following a brief illness.
He was born on Nov. 4, 1926 in Gallatin Mo. to Cleo “Bud” Keane and Macie (Musselman) Keane. Following his graduation from Jefferson City High School in 1944, Buddy enlisted in the United States Army. After serving in Japan, he returned to school, earning a Batchelor’s degree from Iowa State University and a Master’s degree from Indiana University. He taught school and coached football and track at Bluffton, Seymour and Rolling Prairie High Schools before moving to Bedford in 1966. He spent 22 years teaching and coaching in the North Lawrence Community School system before retiring in 1989. He enjoyed bowling, football and cruising around town with the top down on his convertible.
He is survived by a daughter, Lisa Wagner (Tim) of Bloomington; a son Bill Keane of Bedford; two grandsons Nick Ackerman and Zack Wagner, both of Bloomington; two nieces, a nephew and several great nieces and nephews.
He was preceeded in death by his parents and a brother, Jack Keane, of Wichita Kan.
Funeral services will be on Friday at 11 a.m. at Day and Carter Mortuary, with interment to follow at Cresthaven Memory Gardens. Brother Clarence Brown will officiate. Friends may call from 4-8 p.m. Thursday and from 10 a.m. until the service Friday.
Clyde W. Phillips – Bloomington
Clyde W. Phillips, 72, of Bloomington, passed away at his residence in Bloomington on Monday January 13, 2014. He was born in Monticello, Kentucky on September 13, 1941 to Elisha Phillips & Angie Lee (New) Phillips, he attended Springville School. Clyde was a retired Truck Driver & also was a driver for Yellow Cab Company.
Clyde will be sadly missed and was loved by many.
Survivors includes two sisters; Carolyn Allen of Bedford and Dorothy Phillips of Oolitic
He was preceded in death by his parents, Brothers; Thomas Phillips, Ernie Phillips, Herman Phillips, Cecil Phillips, Robert Phillips, 1 Sister; Mary Jane Kidd
Friends may call on Thursday January 16, 2014 from 10 a.m. until 1 p.m. at Cresthaven Funeral Home. Funeral services will be held at 1 p.m. on Thursday January 16, 2014 at Cresthaven Funeral Home. Burial will be in Springville West Cemetery.