The following obituaries were received for Thursday – 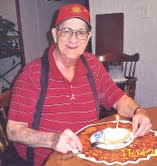 Maurice M. Moody, 78, of Springville, passed away on Wednesday May 1, 2013 at 6:30 am at Garden Villa in Bedford.
He was born on November 14, 1934 in McCordsville to Garnet & Elva (Gordon) Moody; He married Sonnie Simmons on June 5, 1955 at the Free Methodist Church in Bedford by Rev. Elmer Riggs. Maurice retired in 1987 from General Motors, Delco Remy in Kokomo, he was a tool & die maker. He was a member of the Shriner’s, and Masonic Lodge, he participated many years with the Shriner’s Mini-T’s, and he was an avid fisherman and all around wonderful guy.
Survivors include his wife, Sonnie Moody, of Springville; 3 children, Cindy and husband Dennis Graves, of Utica, Michigan, Rick Moody and wife Mary, of Washington, and Tamara Eaker, of Washington; 6 grandchildren; 4 great grandchildren, 2 brothers, Gale Moody and wife Jeannie and Danny Moody and wife Wanda.
Maurice was preceded in death by his parents and brother, Dale Edwin Moody
Funeral Services will be on Friday, May 3, 2013 at 1pm at Cresthaven Funeral Home. . Burial will be in Cresthaven Memory Gardens. Friends may call on Thursday, May 2, 2013 from 4 pm until 8 pm at Cresthaven Funeral Home; Masonic rites will be given at 7 pm by Oolitic Patriot Lodge #750.