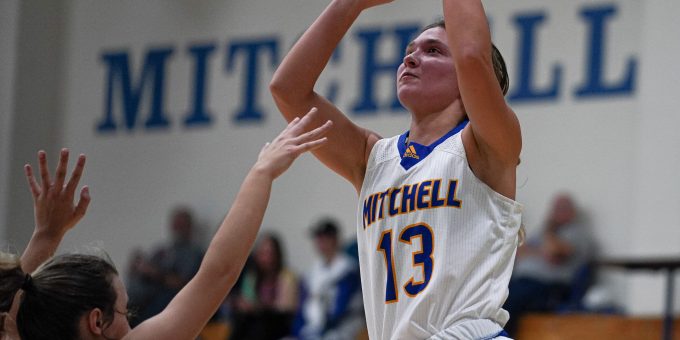 After a tough string of losses on the road last week, Mitchell High School returned home on Tuesday for their first game in their four at The Hive against Brown County

After getting behind early, the Bluejackets made multiple runs to get back into the game, but were held off each time before eventually being defeated 68-54.

Mitchell found themselves behind by seven at the end of the first quarter after a hot start from the Eagles, who scored 18 in the period. The Bluejackets were able to hang around early on thanks to their strong free-throw line, where they made all seven of their attempts in the first quarter to go along with baskets from forward Brooklyn Peterson and guard Malaya Tanglao.

Mitchell went on to outscore Brown County in the second, scoring 18 points to their 17, behind strong performances in the quarter from Peterson, who scored eight points while shooting a perfect 2/2 from the floor and 4/4 from the free-throw line and Mylea Slone, who scored seven in the period.

Slone made her return to the Bluejackets’ lineup on Tuesday after missing the team’s last matchup against Springs Valley, as she continues to battle a lower body injury that she has struggled with all season. Mitchell head coach Tim Haworth said Slone’s return had an immediate impact on the Bluejacket’s offense on the night.

“Getting Mylea back as you can see, all of a sudden now we score 54 points,” Haworth said. “Getting Sloane back is huge for us, so that gives us a reason to feel pretty good going down the road.”

In her return from injury, Slone played the majority of the game against Brown County, though at one point she had to be removed from the game and evaluated on the sideline by an athletic trainer due to a cramp.

Haworth said her return was originally planned for Thursday’s matchup against West Washington, but after the game was cancelled due to the multiple Senators players suffering from illnesses, they decided Tuesday night was the right time.

With that type of injury, it really didn’t matter when we did it. We were just going to have to do it. And, I think that psychologically for her. I mean, she’s gonna be sore tomorrow and there’s no doubt about that. But you know, and we will probably won’t do much with her tomorrow at practice. I mean, if anything she’ll just shoot. She’s not gonna run up, she won’t doing anything,” he said.

In the second half, Mitchell continued to make runs reducing the Eagles’ lead, though they were never able to get in the driver’s seat. With around a minute left in the quarter, a basket from Jillian Bond reduced Brown County’s lead to just two points. Afterwards, the Eagles went on a quick 7-0 run to close the quarter with a nine point lead.

That was ultimately the closest the Bluejackets were able to get to the lead for the remainder of the game.

Both teams struggled to hold on to the ball, with Mitchell committing 17 turnovers and Brown County giving up the ball 16 times themselves, leading to a fast-paced game speed that Haworth felt benefited the Eagles.

Slone and Peterson each finished the game with 16 points, leading the Bluejackets’ scoring efforts on the night, with Bond not far behind with a 14 point double-double, with 10 rebounds.

For Mitchell, the cancellation of Thursday’s game against West Washington could prove beneficial, as it will give Slone, as well as starting guard Zoey Smith, who missed the game on Tuesday after being diagnosed with an illness, an additional few days to recover.

Their next time on the court with be Saturday, when they travel to North Daviess to participate in a tournament. Their first round matchup will take place at 11:00 a.m., when they take on Clay City (2-5). Win or lose, they will play their second and final game of the event at 12:30 p.m. against either North Daviess (3-4) or Rock Creek Academy (4-1).