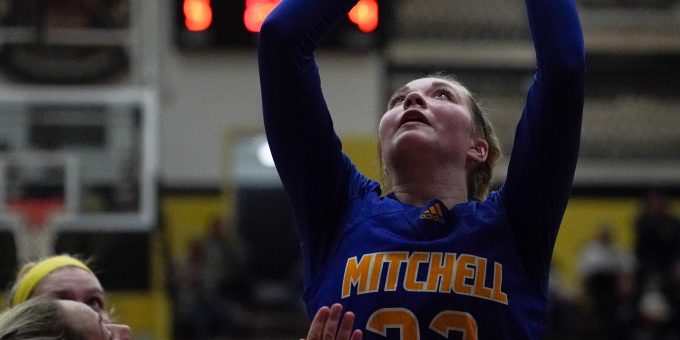 Mitchell High School was defeated Tuesday night on the road against Patoka Lake Athletic Conference opponent Springs Valley, who bested the Bluejackets 43-25 on the night.

Mitchell got off to a slow start in the first quarter, scoring just four points, both of which came via baskets from forward Jillian Bond. On the other side, the Blackhawks came out of the gate strong, particularly freshman Maddie Carnes, who scored six points in the first on 75% shooting from the field. Overall, Springs Valley scored 11 in the period, giving them a seven point lead heading into the second quarter.

In the second, the Bluejackets were able to find a better rhythm on offense, doubling their first quarter point total by scoring eight points. The second quarter saw a more balanced offensive attack from Mitchell, with Brooklyn Peterson and Zoey Smith each netting a two-point field goal, Bond going 1-2 from the free-throw line and an and-one from senior forward Taylor Lee.

Though they were able to substantially increase their offensive output in the second it was not enough to match the Blackhawks, who continued on a roll scoring 12 in the second quarter.

Heading into the half the Bluejackets trailed 23-12, a deficit that would only increase as the game continued.

In the third, Bond and Peterson, who have been Mitchell’s leading scorers on the season, combined for seven points. Though the third quarter proved to be the least successful showing for Springs Valley in the game, they were still able to outscore the Bluejackets, adding nine more points to their total on the night by the quarter’s end.

Going in to the final eight minutes of regulation, Mitchell trailed by 13. Though they were able to turn in a valiant performance by the end of the quarter, converting 66% of their six free-throw attempts and scoring six in total, the Blackhawks were able to comfortably maintain their advantage through to the final buzzer.

Though the Bluejackets struggled to get their shots to fall on the night, shooting just 27% from the field on nearly thirty attempts, they continued to show improvement from the free-throw line, shooting 75% against Springs Valley compared to 36% in their season opener against Lanesville, or 64% in their most recent game against Barr-Reeve.

Mitchell was also more aggressive in seeking the three-pointer, shooting 11 from long range against Springs Valley, compared to their previous two games, against Barr-Reeve, where they attempted three and the one before that against Brownstown Central, where they only had one try from beyond the arc.

This loss marks three straight for the Bluejackets, who have now fallen to 2-5 on the season. This was also their first PLAC loss, evening their conference play record at 1-1 on the year.

After four straight on the road, Mitchell will return to The Hive on Nov. 29 for their next matchup, where they are set to take on Brown County (1-4). The game will tip-off at 7:30 p.m.