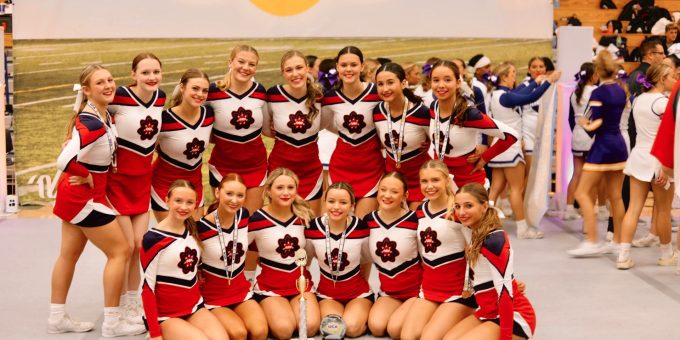 BEDFORD – For the first time in school history, the BNL Cheer team has qualified for UCA Nationals in two categories, which take place at the ESPN Wide World of Sports Complex in Orlando, Florida February 10-12, 2023.

The team placed sixth in the Small Varsity Traditional and third for Game Day at the Hoosier Regional in Fishers on November 20th.

The Cheer team is making preparations to travel to the contest in Orlando with fundraisers to raise funds for the competition, while also continuing to practice hard. Head Varsity Cheer Coach Kaylee Rynders knows how much this means to her girls and feels it is a way to show off what they have accomplished so far.

“This is a big deal as this has never happened for the cheer squad,” said Rynders. “This is the first time BNL Cheer has qualified for UCA Nationals, which is historic in so many ways. This is a great time to show how hard they have worked throughout the season, and how much effort they put into every practice. These girls are excited and ready to go for February.”

To prepare for the trip outside of practice, the girls will begin the process of raising funds to leave for Florida. Before they can go, they will need final approval from the NLCS School Board prior to their trip.

The cost of the trip, food for the team and coaches, as well as clothing and uniforms will be used from funding raised in a variety of ways, both individually and as a team, with one coming up in December.

“We are looking at doing letters to Santa in December,” Rynders said. “We are offering families the chance to submit a form with the information of their child and what they want for Christmas as well as anything they want to tell Santa. The team will then drop them off to mail to the children, so they can have some magic for Christmas.”

Each submission will be $5 per child, and households with multiple children can submit the information for $10 in total. Additional fundraisers will begin shortly.

Members of the BNL Cheer Squad include:

For a look at the schedule for the UCA Regional Championship, click here.