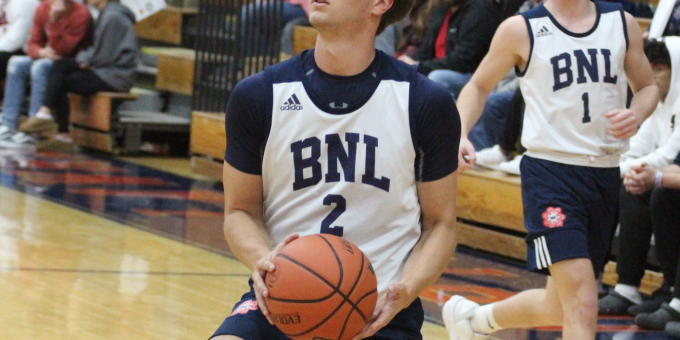 BEDFORD – As the new season dawns, rays of optimism peaking over the horizon, the shadows of questions will be illuminated. How good will Bedford North Lawrence, glowing with experience, be during the 2022-23 campaign? Let there be light. The Stars are about to find out.

The Stars will flick the switch on the season opener, and the spotlight will be bright. Most programs would like to start with a soft, low-wattage debut, conserving energy. BNL will begin with a 300-watt, full-power opponent when the Stars face Bloomington North on Tuesday night at BNL Fieldhouse. There’ll be no hiding from the glare.

The Cougars, coming off a 24-4 march to the Class 4A semistate last season, could be the most formidable foe on BNL’s schedule. They feature an Indiana All-Star candidate and Div. I star, they have size and firepower. When the preseason polls are released (North is No.9 in the IBCA poll that does not divide by classes), they will be prominently mentioned. North coach Jason Speer, a BNL alum, believes this team could eventually be better than last year’s Final Four squad.

“They’re talented, there’s no question,” BNL coach Jeff Hein said. “We’re going to compete, see what we need to learn, go from there.”

Should the Stars back down? Hardly. BNL returns its starting lineup, plus it has additional strength on the bench, from a year ago, and the Stars are the last team to conquer the Cougars during the regular season. BNL split games with North last year, and the Cougars ripped off 17 consecutive wins after the rematch loss to the Stars. That sets the stage for quite an interesting clash.

Let’s start with BNL. Colten Leach, a senior wing who led the Stars in scoring (15.1) and rebounding (7.5) a year ago, is back to full strength after recovering from an offseason injury for the third straight year. Colton Staggs (13.6 points) will be a strong second option. Factor in the contributions of seniors Kaedyn Bennett (8.2) and Jett Jones, plus junior guard Trace Rynders. Off the bench, BNL will likely get minutes from Kole Bailey, newcomers Noah Godlevske and Kline Woodward, and others on a deeper team.

“The kids know my system, they know exactly what is expected,” Hein said. “We have everything back from last year, so we’re optimistic. And I think we have more options.”

BNL’s strength should be ballhanding (the Stars averaged only 9.1 turnovers per game last season) and defense (they allowed only 48.9 points per game). What is needed is more offensive output after averaging a problematic 48.6 points last season.

“He’s a special player,” Speer said. “He’s very determined to have a great senior year. His ceiling is really high. I don’t think he’s played his best basketball yet.”

In addition, North will feature senior Bril Kante on the interior. The question will be the backcourt following the graduation of guard Nick Klaiber (18.9 points). That spotlight will focus on seniors Gavin Reed and Dawan Daniels, plus sophomore Luke Lindeman (the son of former IU big man Todd Lindeman). A lot will hinge on their production.

“It’s a matter of testing them, how consistent we can be from the perimeter positions,” Speer said. “There is some versatility. I would like to think, after last season, we know how to play fast. We should be good to sit down in a halfcourt game. Defensively, we can be good on the perimeter and good at the rim.

“I’d really like to think we surrounded our interior players with great shooters. That will be the key for us, if we can open up some driving lanes with our shot-making ability. We have a chance to be better this year. I don’t know if the record will be the same, but if things go the way I think they can go, we can be a better team.”

North won the opener last season, rolling to a 66-47 home win. Staggs paced the Stars (who were without Leach as he came back from knee surgery) with 21 points while Bennett totaled 14. In the rematch, the script was flipped. Klaiber was injured for North, Leach was back, and the Stars hammered out a 48-40 victory in the finale of the Danny Bush Classic in December. Leach had 20 points.

“We controlled the ball,” Hein said of the second-game win. “When they’ve caused turnovers, we’ve struggled. We have to handle the pressure. They’re definitely going to come after us, they’ll use their length. We have to make good decisions, handle the basketball. As tall as they are, they can extend their defense.

“We’ve got to be able to do that again. We have to take what they give us and not panic against the press. They can create big runs with their defense, and you can’t catch up from that kind of run.”

North went on a rampage after that setback, a run that didn’t end until a 61-55 loss to eventual state champion Cathedral in the semistate. Winning and success creates a mindset that carries over.

“It can be contagious, but any sort of preseason rankings is something from last year,” Speer said. “We’re very proud of winning the sectional and regional, but that was last year. We need to be focused on what we can do this year.

“With BNL, you have a starting five coming back, a fantastic home court advantage. On paper, it will be really tough.”

Last meeting: The Stars and Cougars split games last year. North won the regular-season opener 66-47, while BNL won the rematch 48-40 in the title game of the Danny Bush Classic. Nick Klaiber had 18 points for North in the first contest, while Colten Leach paced BNL in the second clash with 20 points.