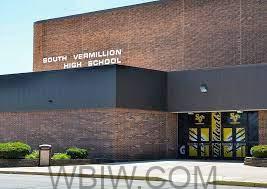 VERMILLION CO. – An investigation is underway after an officer accidentally fired a gun at South Vermillion High School injuring a student.

The male student who was struck is a senior at South Vermillion. Chapman said the student was taken to an area hospital with an injury described as non-life-threatening.

“When I got on the scene, he was on the stretcher with the EMTs, kind of cutting up a little bit. When he asked how his pain level was, he said it felt like a sting. So it was a graze, a superficial wound, and he was going to be transported to the hospital in Terre Haute to have it looked at,” Chapman said.

The student’s parents were notified and were able to meet him at the emergency room.

Deputy DisPennett has been placed on administrative leave, which is customary in these types of situations.

At the request of Vermillion County Sheriff Mike Phelps, Indiana State Police will conduct an investigation into what took place.