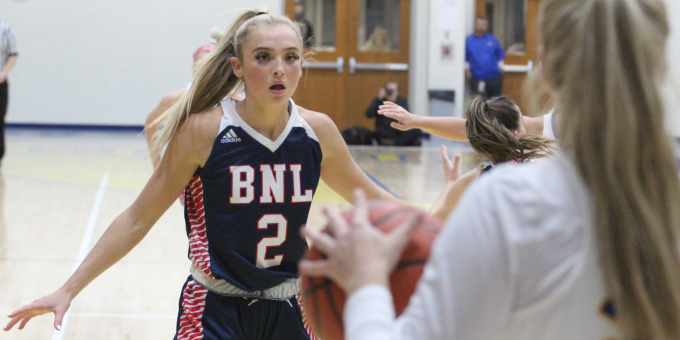 BEDFORD – In years past, by this point in the season, Bedford North Lawrence would have already faced some growth tests, some toughness challenges, some demanding contests to determine just how good the Stars really were.

For whatever reason, whether it be BNL’s extreme talent or the opposition’s issues, the Stars have won their first four without breathing hard, winning by an average of 39.8 points and triggering the running clock in the second half three times. Sooner or later, Easy Street will take a detour onto Roughhouse Road, and the No.4 Stars will face adversity.

BNL coach Jeff Allen expects it now, when the Stars welcome North Central to BNL Fieldhouse on Friday night. The Panthers (0-3) lost an Indiana All-Star and three other starters from a year ago, when they pushed BNL to the brink, so they’re still in self-discovery mode. But they have the physical tools to make life a lot more difficult than it’s been for the juggernaut Stars.

“Talent comes in waves,” Allen said when looking back at the first four wins. Then he looked ahead. “North Central can give us a challenge, and we probably need that, for our team to grow.

BNL’s ease of victory has been made possible by the hard work of defense. The swarming Stars have made it almost impossible to run any semblance of offense, forcing almost 30 turnovers per game. Successfully navigating the ball into the front court is just the first problem, as BNL’s quickness and tenacity has harassed opposing guards into dysfunction.

“I just like the effort,” Allen said. “I never have to worry about if these kids are going to play hard. That’s a phenomenal thing. There will always be things with execution, or a missed assignment. But my goodness, if the kids are playing as hard as they can, it’s hard to fault them.”

BNL’s scoring leaders, for an offense that has produced 69.5 points per game despite the shorter time frame of games, include junior Chloe Spreen (23.8 after her career-high 35 at Bloomington South), senior Karsyn Norman (16.8 points and 5.3 assists) and senior Mallory Pride (11.0). The more impressive stat is the collective 17.5 steals per game (led by Norman at 4.8 and Madisyn Bailey at 4.3).

But for this clash with North Central, the most important number will be rebounding. The Stars can’t come up short (pun intended) in that category against the Panthers, who will feature 5-10 senior Nakiya Harris and 5-10 senior guard Ava Couch.

“They have size on us, which is always an issue for us,” Allen said. “They have kids with size and strength, some capable scorers. They like to get out and pressure with their zone, trap on the sideline, so we have to be sharp with the basketball. They have kids who can attack the basket. And the big deal will be rebounding. If we let them have two or three opportunities, it could be a rough night.”

BNL won last year’s game 54-51, rallying from a 13-point deficit in the third quarter as Norman willed her team to a road victory with 18 points. Carlee Kern added 12 points, and Emma Crane hit two clinching free throws with 3.7 seconds left during that win. Tanyuel Welch (an Indiana All-Star now at Memphis) had 15 points and Destinee Hooks totaled 13 for North Central.

While BNL has been blowing out everyone in its path, Allen is still tinkering for improvement, most notably in team shooting percentage and execution. That’s his job. Get better for February.

“We need to make a better pass to the shooter,” he said. “Maybe we’re not getting the ball to someone to just catch and shoot, they might have to bobble it or dribble, and give the defense a chance to react. Just little things that will make us better.”

Game notes: BNL ranks seventh in the state in scoring at 69.5, and seventh in winning margin at 39.8.