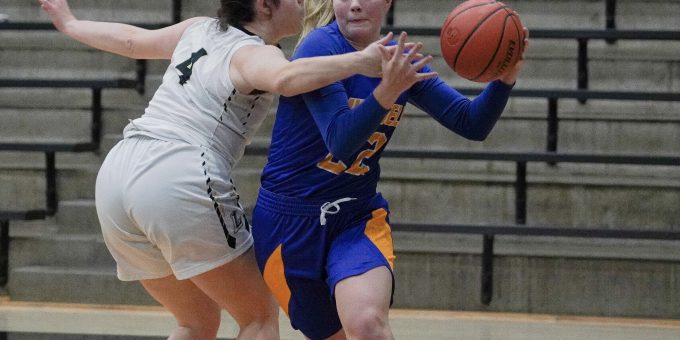 Mitchell hit the road for their first away game of the season on Tuesday evening, heading to Loogootee to take on the Lions.

Entering the game with a 1-2 record and having just suffered a nearly 60-point defeat at the hands of Lawrence County rival Bedford North Lawrence, the Bluejackets bounced back in a big way, evening up their season record in strong fashion in Jack Butcher Sports Arena, beating Loogootee 54-38.

Mitchell had some good looks in the first quarter, but struggled to get much of anything to fall. After some near misses on jumpers, they ended the first eight minutes of play trailing the Lions 7-12.

The Bluejackets found their rhythm in the second quarter, with senior guard Mylea Slone unleashing for 10 points, draining two three-pointers. They ended the half with a two point lead and never looked back.

“I swear, in that first quarter had something on it. I counted at least five or six shots in the paint that just didn’t go in” Mitchell head coach Tim Haworth recalled.

“I think in the second quarter is when we started to pick up our tempo on defense and that’s kind of what got us going there. From that point on, once we got the lead it was just a situation of us playing our game,” he continued.

Slone finished with 18 total points and was the focal point of the Bluejackets offense on the night. Her scoring efforts were matched on the night by Brooklyn Peterson, who also finished with 18 points. Other offensive contributors for Mitchell were Jillian Bond, who scored 11, Malaya Tanglao, with five points and Zoey Smith, who added two points.

Haworth said he was pleased with the development shown by Smith and Tanglao, who continue to gain experience and confidence playing big minutes with the varsity squad.

As they continue to settle into their roles, he expects an increasingly balanced offense with the two guards aiding Slone in the backcourt, as well as Bond and Peterson, who continue to be a force in the paint.

“Usually we want to go through Mylea if we’ve got a chance, but tonight Tanglao stepped up and hit a big three. Zoey took the ball to the rim hard. Once those kids start getting confidence, that’s going to make our attack a little more balanced.” said Haworth.

“It’s just breaking them in. They might be a little hesitant, but tonight I saw them looking at the rim more, instead of looking for who they’re going to pass it to. But, for us really everything goes through Mylea, but we also know that with Brooklyn and Jillian inside, they can do some damage in there,” he added.

Defensively, the Bluejackets were aggressive against the Lions, playing a full court press defense and sending constant double teams at ball handlers.

Heading into the matchup, Haworth said the team was looking to neutralize junior Loogootee guard Emily Hawkins, who had proven to be an offensive threat for them thus far this season.

“Number three for them, Hawkins, she was the one we were concerned with,” said Haworth. “There’s some things that she can do. Despite her size, she made some tough shots for them out there tonight.”

Hawkins lead the Lions in scoring, finishing with 13 points.

Next, Mitchell will travel to Brownstown Central on Friday to face the Braves, who sport a 3-1 record on the year. Tip-off is set for 7:30 p.m.